Don’t let holidays weigh you down 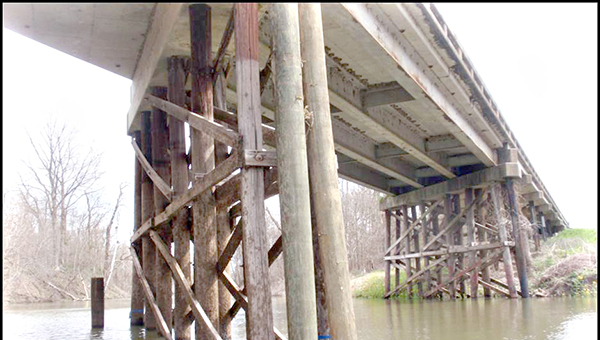 CROSSING: A bridge supported by wooden pilings crossing Muddy Bayou on Mississippi 465 is one of the bridges identified as deficient by a Mississippi Economic Council report on state and local roads and bridges.

County bridges among those called deficient in MEC report

According to a Mississippi Economic Council report on state and local roads and bridges released Friday, 2,989 local bridges across the state are deficient and need replacing, and 21 of those are in Warren County.

The report, titled “MECExcelerate Report,” looks at the conditions of state and local roads and bridges and makes recommendations for funding and improving state and local transportation infrastructure.

“We’re an organization of many businesses, and as you can imagine they’re very concerned about getting products in and out and they’re also concerned about getting their employees to work and people being safe, and a lot of other states are looking at this, too,” an MEC spokesman said, adding the recommendations in the report are the result of the infrastructure study.

According to the Excelerate report, the Blueprint Mississippi Transportation Task Force used independent researchers from the University of Southern Mississippi, Mississippi State University, the Stennis Institute of Government and the resources of Cambridge Systematics Inc. a consulting group, to determine the needs, costs and approaches for dealing with Mississippi’s highway and transportation needs.

Besides using Mississippi Department of Transportation information on bridges and roads, blueprint researchers developed their own assessment of needs and costs different from MDOT’s with comparable results.

Researchers also received help from the Mississippi Municipal League and the Mississippi Association of Supervisors to conduct a survey of local bridge and pavement needs to determine a clear definition of the need and cost.

Many of the bridges in the county, including those in Vicksburg, are maintained by the county through MDOT’s State Aid Bridge Program, in which counties receive state funds to repair or replace local bridges.

County administrator John Smith said the county receives an annual allocation from MDOT “and we try to do as much work as we can with the money we receive.”

He said the county this year is replacing the Avenue D bridge, another on Mississippi 27 and are in right of way negotiations to replace a bridge at Ballground Road, and work may also have been done on a bridge on Fisher Ferry Road.

The additional funding would provide $3.75 billion over the first 10 years of the program, and continue to provide funding going forward, according to the report.

• Replace the 138 state “posted” bridges that cannot carry the weight or function for which they were constructed, replace all timber bridges within 10 years, and fix an additional 424 of the total state deficient bridges during the same period.

• MDOT should repair or replace all road surfaces that no longer serve the purpose for which they were constructed, and provide continuous funding for preventive maintenance.

• Increase funding by at least $75 million annually and adding to the $52 million currently provided by the State Aid Program, and $20 million from the Local System Bridge program for local governments to increase bridge and road improvement efforts.