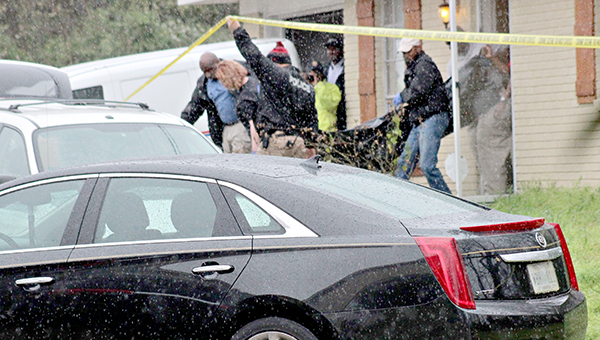 Eight days after he escaped from the Warren County Jail, Rafael McCloud’s luck ran out.

McCloud, 34, was found dead about 7 a.m. Thursday in the tub of a bathroom of a home he broke into, shot by the residents.

According to Vicksburg police, McCloud was holding the couple and their 5-year-old son in the bathroom, when he allowed the wife to leave. She returned with a handgun and  fired one shot, which she believed to hit McCloud. After she freed her husband, he took the gun and fired additional shots at McCloud. The family left the house and ran outside, where they flagged down a passing motorist and asked them to call 911.

McCloud was found in the bathtub with multiple gunshot wounds, including one to the head. He was declared dead at the scene by deputy Warren County corner Kelda Bailess. An autopsy was ordered.

His death ends a round-the-clock search for him that began March 2 when he overpowered a jail guard and managed to slip out a side door at the jail.

“This is certainly not how we wanted this to end,” said Warren County Sheriff Martin Pace. “Our goal was to take him back into custody and have him stand before a jury in Warren County. But he brought this upon himself.

“We are incredibly relieved this family was not seriously injured and they were able to protect themselves this morning,” Pace said. “It’s been a long week for this community and we appreciate the cooperation of the public as we have pursued this community.”

Vicksburg Police Chief Walter Armstrong said authorities believe McCloud had help while he was on the lam in avoiding authorities.

“He had on tennis shoes; nice, white tennis shoes and a pair of blue jeans, so there is some indication someone has been helping him or he stole those items,” the chief said. “But the shoes looked to be the exact size he wears.”

He added police received several reports that McCloud had been seen in the Fort Hill area, including a report he was seen around the McNutt House, a historic home on First East Street. He said police were checking other homes on Fort Hill Drive to see if McCloud might have attempted to or broke in them.

McCloud was shot several hours after he broke into the home in the 600 block of Fort Hill Drive about 4 a.m. Thursday, fought with the homeowner and his wife and held them hostage until they were able to get free and shoot McCloud. Armstrong said the man suffered a non-lifethreatening stab wound and was taken to Merit Health River Region Medical Center for treatment. His wife was hit it the head during a fight with McCloud, but did not have to go to the hospital.

Armstrong said McCloud entered the house through an unlocked door and attacked the husband when he was on his way to the garage to start his wife’s car. The man and his wife both fought McCloud before he was able to subdue them.

McCloud was awaiting trial for capital murder and other charges in the June 28 abduction and death of Sharen Wilson. He escaped from the jail about 5:30 a.m. March 2 after using a shank, or homemade knife, to assault and overpower one of the three guards on duty at the jail.

Sheriff’s deputies assisted by Vicksburg police and state and federal law enforcement agencies concentrated their efforts in the northern part of the city, where authorities said he was known to have lived and has friends and relatives.

Search teams also multiple times revisited the Kuhn Memorial Hospital property, where McCloud is accused of killing Wilson, and where officers March 3 found a pair of pants he took from the jail guard.

Teams Friday searched all three buildings on the property floor-by-floor in an effort to find him. Thursday, they used a Mississippi Highway Patrol infrared-equipped helicopter to scan the building and other areas without results.

McCloud, who had been in the Warren County Jail since his arrest June 29, was indicted in January on multiple counts involving Wilson’s death, and has prior felony convictions for auto burglary, grand larceny and armed robbery, according to court records.