Lula Mae Cooper has seen a lot over the… 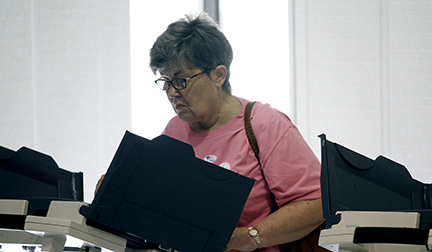 Ford and Easterling in runoff for District 54 seat

Kevin Ford and Dr. Randy Easterling will meet in a runoff election Nov. 28 to fill the unexpired term of former state District 54 Rep. Alex Monsour, who resigned his office after winning the South Ward alderman’s seat for the city of Vicksburg in June.

Incomplete and unofficial returns showed Ford finished first in the three-candidate race with 923, or about 36.5 percent of the total 2,523 votes cast, to 837,or about 33.1 percent for Easterling. Joe Bonelli had 763 votes, or about 30.2 percent.

“It’s just sinking in,” Ford said. “We worked real hard and final count was about 4,200 voter doors that we got to. We met with each one of them, laid out our policy positions, asked them their concerns and we think it paid off. We start over. The first thing I’m going to do is convince my dad to start driving me again.”

The voter turnout for Warren County was 20.36 percent, while the turnout in Issaquena was about 22.7 percent, and about .05 percent in Yazoo.

Ford won Warren and Yazoo counties, getting 803 votes in Warren and 93 in Yazoo. He and Easterling tied in Issaquena County with 27 votes each. The Warren County totals included all but four absentee votes. Those votes, as well as 11 affidavit ballots will be resolved Wednesday. Information on absentee and affidavit ballots in Issaquena and Yazoo counties was unavailable.

“I think we got our message out, we’ve just got to continue to do that and meet the people in Warren Yazoo and Issaquena counties, and get the message out about education, job creation and good health care,” Easterling said. “We start right tonight.”

“The people spoke and that’s what it’s about,” Bonelli said. “I just tried to represent a segment out there … I didn’t do any walking or knocking on doors, but as far as spending money, I think I did real good.”