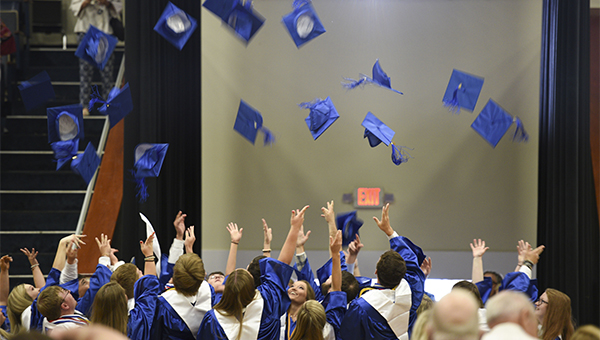 2018 Graduates of Porters Chapel Academy toss their caps in the air after graduation at the Vicksburg City Auditorium Saturday. (Courtland Wells/The Vicksburg Post)

Alisa Harvey had just secured the balloons for her son Cameron in the lobby of the Vicksburg Auditorium and was heading back to join her family.

“I was afraid they might get loose,” she said.

Cameron Harvey was one 28 seniors who graduated Saturday from Porters Chapel Academy.

Alisa Harvey said she was greeting the event with mixed emotions.

“I’m so excited to see him graduate, but at the same time, he’s going to be going off on his own,” she said. She said her son was going to Hinds Community College, where he will major in criminal justice, and then go to the University of Southern Mississippi.

“He’s hoping to play soccer for Hinds,” she said. “He has a second tryout in June. We’re hoping he gets it.”

Cameron and his classmates received their diplomas before more than 200 family members and friends.

“These students have truly been an asset to our school,” said Pam Wilbanks, the school’s headmaster.

Miss Mississippi Anne Elizabeth Buys, a PCA alum, told the grads, “You have made a huge stride and accomplishment by being where you are today … you are surrounded by people who love you, are for you and who want you to succeed. This is only the beginning.

“Each and everyone of you are off to an incredible journey.”

She urged the graduates to go after their dreams and goals “with all of your heart.”

Buys encouraged them to be leaders, adding, “You all can make a difference in this world.”

In his address, salutatorian Cody Lyons told his fellow graduates to keep their options open.

“Whatever your course is, remember — it’s not the final course; it’s not written in stone,” he said. “It’s open to opportunity. The world is full of opportunities, and I encourage you to examine each and every one of them. Find your own path and don’t look back.  God will provide us with the guidance that will lead us in the right direction.”

Valedictorian Josh Arias described his class as “hands down, the greatest people I’ve ever known. I will forever be grateful to God that he placed these people in my life.”

Whether or not they were ready, he said, “It is time for a new, exciting chapter in our lives full of endless possibilities. Time isn’t going to stop for us. We are being pushed out into the real world. God has a plan for each and every one of us.

“My time at Porters Chapel has been one of the best experiences of my life,” Arias continued. “And for that, I thank the teachers and the staff. I would like to thank my classmates of the class of 2018 for making these last four years of my life the greatest ever, and I hope you have many more.”