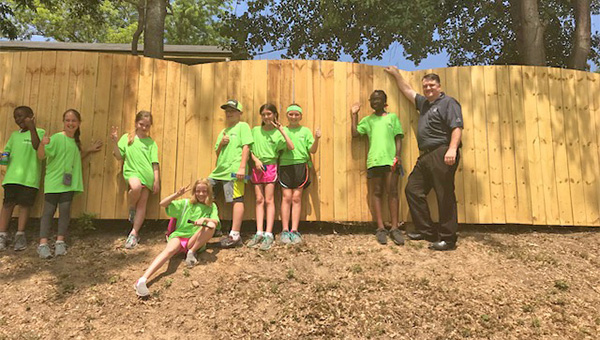 Vicksburg Warren School District superitendent Chad Shealy stands with students at Bowmar Avenue Elementary school in front of the new fence that was donated by the Heritage Guild.

The exterior of Bowmar Avenue Elementary has gotten a facelift thanks to the Heritage Guild Vicksburg Warren.

The Heritage Guild worked with the city of Vicksburg and the Vicksburg Warren School District to donate a wooden fence to the school to make the entryway more visibly appealing for members of the schools’ community as well as national visitors who come to the school to see Leader in Me in action.

“When our organization started, we wanted to focus on neighborhoods where we could engage a younger demographic, parents of the students at Bowmar and parents of the students at Grove Street so we chose those two areas to have our focus,” Dinah Lazor, the secretary of the Heritage Guild, said. “We were looking at not just restoring one house, but how our historic assets in Vicksburg and Warren County are seen and utilized by all citizens. We wanted to look at using our historical assets to better the community for residents, but also as it related to economic development and tourism.”

The process of installing the fence started in 2016 and took almost two years to complete as they worked with the city to see what ordinances would impact the project and the school district to get permission. The Heritage Guild also partnered with Dimco, which did a free survey for them so they would know the correct boundaries of where to put the fence.

Master gardeners in Warren County were also consulted to develop a landscape plan for the area around the fence, which Lazor said they hope to implement in the future.

“I think it is an example of what a volunteer organization can do working with our school district, working our city government and with private business helping,” Lazor said. “We did not go out and do it by ourselves.”

The final cost of the project was about $2,100, which was funded entirely by the Heritage Guild and the work of actually installing the fence was done by VWSD maintenance workers.

“We know that fence at other elementary schools are often used to display artwork or create a project for students to work on,” Lazor said. “While it is just a board fence up now, we think it will have extended use for the students who go to school there.”

The Heritage Guild is also working with the school district and the Mississippi Department of Archives and History to place a marker at the school entrance explaining the history of the building, which is a registered historic site.