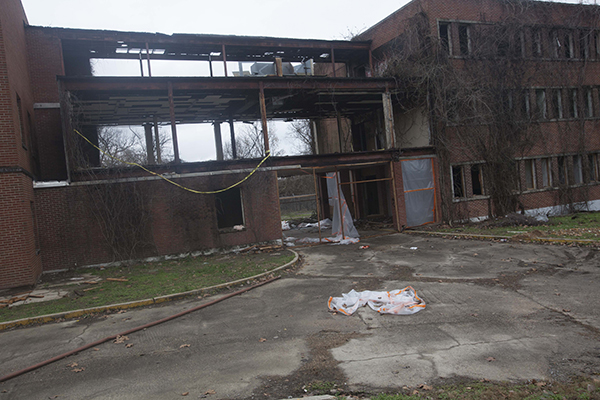 Kuhn Memorial Hospital, operating in Vicksburg until 1989, will be razed and the 12.8 acre property redeveloped under a plan from city officials that began in September. Demolition work of the buildings is expected to take place in January 2019. (Courtland Wells/The Vicksburg Post)

Vicksburg officials have planned a January 16 ceremony to mark the start of the demolition of Kuhn Memorial Hospital.

“We will have the program at 10:30 (a.m.),” community development director Victor Gray-Lewis said, adding he hopes to have officials from the Mississippi Department of Environmental Quality on hand for the ceremony.

The Board of Mayor and Aldermen in September authorized Mayor George Flaggs Jr. to sign a contract with M&M Services to remove the asbestos and raze the buildings on the 12.8-acre property. Work began in December, and the company has 180 days to complete the job.

Gray-Lewis said the company is on schedule to finish the asbestos removal by Jan. 16.

The buildings’ demolition marks the end of a 30-year dilemma for the city that began in the 1980s when Mississippi officials began closing its charity hospital system down to save money.

A city-owned building, Kuhn was funded and operated by the State of Mississippi as a charity hospital until 1989.

In 2000, the Lassiter-Studdard Group Inc., which owned the property at the time, donated it to the Esther Stewart Buford Foundation.

Since then, the property was sold six times for taxes, and city officials tried for at least the past 10 years to get the property owner to clean the property and demolish or renovate the buildings on the site. The board on July 6, 2017, put the 12.8-acre property under the city’s slum clearance ordinance in a move to step up its efforts to remove the complex’s main building.

When the parties with an interest in the property failed to present plans to either raze or renovate the buildings by September, it cleared the way for the city to begin the process for their demolition.

City has a plan

The city officially took title to the Kuhn property Nov.1, 2017, after reaching agreements with the four parties that had interests in the property.

The decision to acquire the property came after the board in April 2017 approved a resolution adopting and authorizing a 33-page urban renewal plan to first demolish the buildings on the property and clear it, then, begin the process of finding a developer or nonprofit agency to develop it into a multipurpose residential/commercial development with recreational facilities.

Flaggs has said several developers have expressed an interest in the property.