After years of discussion, first big step taken toward… 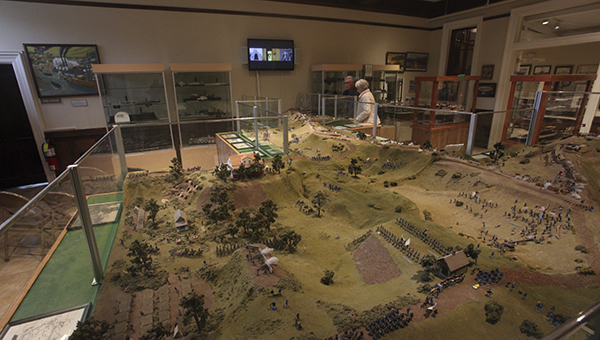 From the railway dioramas, to Civil War gunboats to a miniature model of the Vicksburg National Military Park, visitors can step back in time, while viewing life-like scenes.

Benway serves as the chairman of the board and the director of the museum, which was formerly a depot for the Yazoo and Mississippi Valley railroad.

“We actually had four railway stations here in Vicksburg, Benway said, “And this depot served 28 trains a day in the early 1950s — both passenger and freight.”

Benway said the Old Depot Museum got its start 25 years ago when Lamar Roberts, who was the museum’s founder, had to find a place for his gunboat model collection.

Roberts passed away on Saturday.

Roberts’ response to his wife, Benway said, was, “I am going to miss you.”

Roberts however, opted to keep his wife, and wound up renting a small building on Washington Street, which became the start of the museum.

Brenda, Benway’s wife and financial advisor for the museum, said from there it moved into a little shop on Clay Street.

“It then went back to Washington Street and then to the big gunboat that was on the North Frontage Road,” Brenda said.

The museum was there for several years, she said, until Roberts worked with the city of Vicksburg and MDOT where he received a grant to renovate the old depot for the museum.

Currently the Old Depot Museum is housed on the lower level of the facility and half of the upper level, but now that the Vicksburg Convention and Visitors Bureau has moved out of the building, Benway said, the museum will take over the entire upstairs.

Plans are to move the 250 square foot VNMP diorama, which depicts the park in as it was in 1863, to the upper level and expand the railroad dioramas.

Benway, who has been with the museum for 25 years, said he has built and designed all of the railroad dioramas, and now with the additional space, will expand the train dioramas.

“I am fixing to expand two of the three now that we have the former VCVB offices upstairs,” he said.

In addition to the trains, ships, gunboats and VNMP diorama, The Old Depot Museum also includes a replica of the Windsor antebellum Mansion, Tonka toys that were in the Doll and Toy Museum on Washington Street, memorabilia of Jesse L. Brown, who was the first African-American aviator in the U.S. Navy and first African-American officer killed in the Korean War and the original mail slots used by the Illinois Central supervisors when they had the building.

“And now they are back home,” he said.

“The Old Depot Museum has a lot to offer. It’s not just one thing. It’s a lot of different things that we have.”