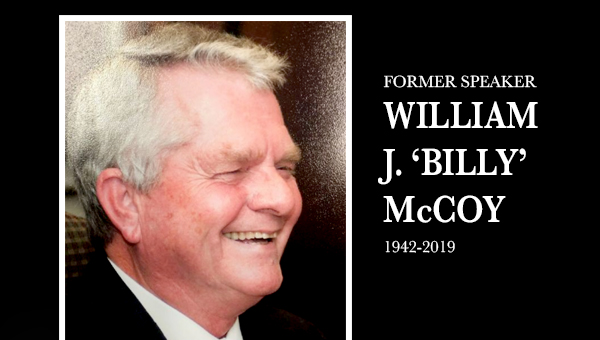 JACKSON — Former Mississippi House Speaker Billy McCoy, an advocate for public education and economic opportunities for the less fortunate, died Tuesday after an extended illness. He was 77.

Rep. Steve Holland of Plantersville said McCoy died at North Mississippi Medical Center in Tupelo, where he had been hospitalized for about two weeks. Holland’s funeral home is handling arrangements for the funeral, which will be Friday.

McCoy was a Democrat from the north Mississippi town of Rienzi. He had worked as a vocational education teacher and spent much of his life as a worm farmer.

McCoy was known for his down-home turns of phrase — and for his occasional hot temper.

In a March 2004 interview, he chuckled when asked about comparisons between raising worms and leading the diverse and sometimes contentious group of lawmakers.

“They both require a heck of a lot of work and a certain amount of luck and the blessings of the good Lord,” McCoy said.

Before he became speaker, McCoy served as chairman of both the Education Committee and the tax-writing Ways and Means Committee.

He chose not to seek reelection to the House in 2011, and Republicans won a supermajority in the chamber that year.

“Billy McCoy was the epitome of what was good about the state of Mississippi,” said Holland, who was McCoy’s deskmate in the House chamber for 28 years. “He had a keen vision of what was good for Mississippi and an innate Appalachian love of the state and its people. He would fight a circle saw with the gusto of a hound dog to see that that vision was done.”

Vicksburg Mayor George Flaggs Jr., who served with McCoy in the Legislature, and was appointed by McCoy to chair of the Bank and Finance Committee in the House of Representative, attended McCoy’s Funeral Friday in Booneville.

“My condolences go out to the McCoy family. Speaker McCoy was one of the first speakers to recognize my potential when he appointed me chairman of the Banking and Finance Committee in the Mississippi House of Representatives — the highest position I held while serving in the Legislature,” Flaggs said. “I’ll never forget his commitment to Mississippi as he was a true statesman.”

McCoy was sidelined for several months in 2004 when he suffered four strokes after undergoing colon surgery. Holland said McCoy had lingering health problems. McCoy’s survivors include his wife, Edith and their children, Sam and Kim.

House members unanimously elected McCoy as speaker, their presiding officer, in January 2004, when Democrats still held their decades-long control of the chamber. He immediately reminded his colleagues to remember the less fortunate as they set public policy.

“There is an ever-widening gulf between affluence and those that struggle to meet the basic needs of life,” McCoy said. “How much is too much? How much is too little? What is our responsibility to balance?”

After a tumultuous four-year term in which McCoy butted heads with Republican Gov. Haley Barbour over taxes, Medicaid and other issues, a coalition of Republicans and conservative Democrats tried to oust McCoy from the speakership. McCoy won his second term as speaker in a dramatic 62-60 vote that took place within the opening hours of the 2008 session.

Thirteen Democrats split from McCoy and sided with all 47 Republicans to vote for Jeff Smith of Columbus, who challenged McCoy for the top leadership job. At the time, Smith was a conservative Democrat; he later became a Republican.

Ten days after surviving the challenge to his leadership, McCoy named Democrats as chairmen of every House committee and gave Republicans only about one-quarter of the vice chairmanships. The committee assignments are important because chairmen have great leeway in deciding whether bills live or die.

McCoy had received strong support from members of the Legislative Black Caucus, and he named a record number of African American committee leaders. He created a Poverty Committee to study what he called one of Mississippi’s most pressing problems.