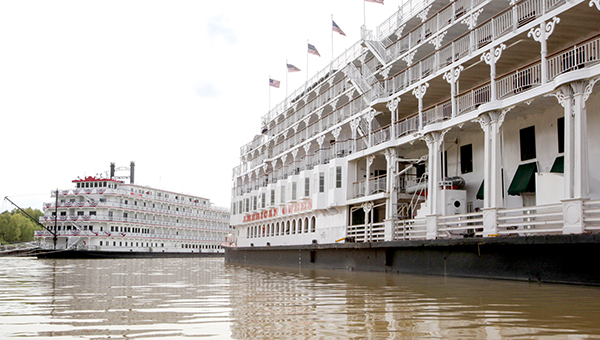 The Vicksburg Convention and Visitors Bureau has said concerns about the COVID-19 virus has caused companies who operate riverboat cruises to cancel 24 dockings in Vicksburg so far this year. (Courtland Wells/Vicksburg Post)

In data from the Vicksburg Convention and Visitors Bureau, an estimated 20 percent of all jobs in Warren County are connected to tourism and hospitality.

As concerns rise about the spread of the COVID-19 virus, some of those tourism and hospitality businesses have had to change the way they do business, cut hours, curtail services and even cut employees.

Laura Beth Strickland, executive director of the Vicksburg Convention and Visitors Bureau, said the slowdown in tourism has changed some of the ways her team markets Vicksburg and supports businesses in the city and county’s tourism and hospitality sector.

“At this time the only hotels that are closed are the casino hotels, which was mandated by the Mississippi Gaming Commission. Some of our bed and breakfast partners have closed, others are hanging in there,” Strickland said. “We have definitely increased our communication, talking with everyone. Giving them updates, increasing our outreach.”

Paul Patel, owner of Southern Hospitality Services, which owns and operates three hotels in Vicksburg — Courtyard by Marriott, Holiday Inn Express and Comfort Suites — and is currently constructing a fourth, a Home2Suites by Hilton, said many of the company’s properties throughout the country have seen significant drops in reservations, including a property in San Francisco seeing reservations drop to single digits.

He also said the company recently closed a hotel in Pearl due to a drop in reservations.

Currently, though, the properties in Vicksburg have not felt the large drop due to reservations tied to shut down operations at Grand Gulf Nuclear Station, International Paper and Ergon, which brought contractors into the market for the scheduled maintenance and repairs.

“We have seen some drop in recent days as some of those workers check out as they have finished their work,” Patel said Sunday afternoon. “But, I don’t know why Vicksburg would be any different than any of our other markets. It’s going to get worse before it gets better.”

As for the construction of the new hotel, Home2Suites, it’s continuing to move forward, but Patel said even that project will be re-evaluated in light of the significant slowdown in the economy.

Strickland also mentioned changes at the VCVB. She said many of her team, now teleworking from home, have focused their efforts on partner outreach and updating information on the Visit Vicksburg website and with community partners.

“On the attraction side, we have reached out to everyone and will be constantly calling them,” she said.

The impact on the economy, particularly the hotels, is not just centered on Vicksburg and Warren County. The state’s tourism industry has seen a big impact as a result of steps being taken by governments and individuals to increase social distancing and discourage travel.

According to the American Hotel & Lodging Association, 33,348 hotel direct and hotel-supported jobs have already been lost in Mississippi.

“The impact to our industry is already more severe than anything we’ve seen before, including September 11th and the great recession of 2008 combined,” American Hotel & Lodging Association President and CEO Chip Rogers said.

“We have had 24 riverboat docking cancellations and we’ve had 94 group tours and 21 car tours, that’s when people pull up and wanted a licensed guided tour of the battlefield park, and the Vicksburg Convention Center has had nine conferences that have planned to reschedule but have had to cancel their original dates,” Strickland said. “It is a major impact, but we will continue to update those numbers and information.”

Overall, Vicksburg has more than 2,100 hotel rooms  — which does include those at casino hotel operations which were closed.