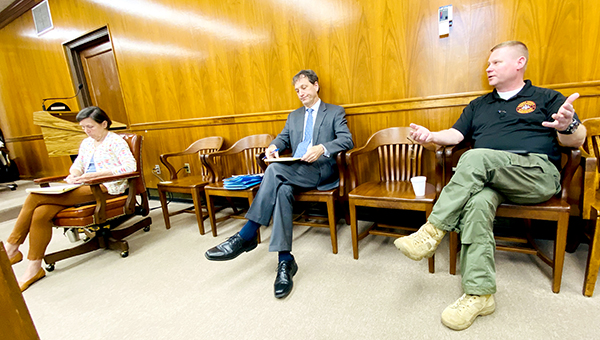 During a work session Monday, members of the Warren County Board of Supervisors discussed a number of steps in an effort to slow the spread of the COVID-19 virus. Pictured above are (from left) District 5 Supervisor Kelle Barfield, county attorney Blake Teller and Warren County Emergency Management Agency Director John Elfer. (Tim Reeves/The Vicksburg Post)

The Warren County Board of Supervisors on Monday discussed a number of measures it will soon take to curtail certain businesses and community operations in response to the spread of the COVID-19 virus.

While the finer details remain to be worked out, supervisors are expected to approve a measure as early as Tuesday that would move any restaurants in the county to takeout and curbside service only, close any bars and nightclubs, and would likely restrict the size of any gatherings in the county to no more than 10 people.

The possible restrictions follow Sunday’s announcement by the city of Vicksburg that would enact similar measures, with one major exception. During a lengthy discussion, in consultation with Warren County Sheriff Martin Pace, Warren County Emergency Management Agency Director John Elfer and board attorney Blake Teller, the board of supervisors decided against installing a curfew in the county.

“This is a Board of Supervisors decision, not a sheriff’s decision, but it is my understanding that they’re discussing closing the bars for the duration of this 14-day period as the city did,” Pace said. “And also, talking about limiting any crowd at a business and we are referring to the convenience stores to not allow people to congregate on parking lots in large numbers.”

Supervisors felt the restrictions on crowd sizes and business restrictions, were measured responses for the time being.

“I think the measures they are taking are necessary and, you know, we might not get it right the first time but we are going to do something,” Elfer said. “What I think the board did this morning is clear, what they’re trying to accomplish, and I do think we will get through this. Most of the people out in the community get it and they’re not going to be a problem.”

Elfer said the discussion by the supervisors and that actions taken by the city Sunday made clear both governmental organizations are “concerned about public health, public safety.”

During the meeting, Elfer took great exception to individuals — specifically county employees — who in the early days of the virus situation and response have posted inaccurate information or rumors on social media.

“It is imperative that our employees not spread rumors on social media,” Elfer emphatically stated to the board. “Because all that does is force me to spend my time trying to negate the bad information. I spend as much time or more doing that then I am trying to push the right stuff out.”

Full details of the county’s action would likely not be available for supervisors to review until later Monday. The earliest the measures could be further discussed and voted on would be Tuesday if the board called a special meeting.