Stuart is making a difference one mask at a… 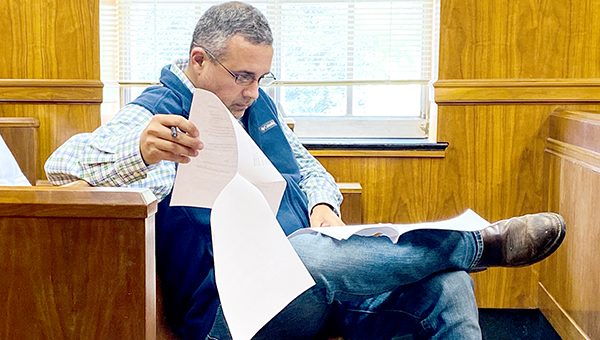 Businesses and groups within Warren County now face a series of operational restrictions aimed at slowing the spread of the COVID-19 virus.

Wednesday, the Warren County Board of Supervisors approved an emergency order, that has been in the works since Monday and involved input from the Warren County Sheriff’s Office and board attorney Blake Teller. The order curtails group sizes, alter business hours and operations for restaurants and shutter some additional businesses.

The measure adopted Wednesday comes several days after the city of Vicksburg enacted a number of changes to business operations, restrictions to the number of people who can be in businesses and in groups and installed a curfew.

The county’s measures, while similar in some ways, does not include a curfew.

“When people take the city’s proclamation and ours and look at them side-by-side, they won’t look exactly the same because it is not necessary for them to look the same,” District 4 Supervisor and Board President Dr. Jeff Holland said. “What is important is that when you pull them together, they work to protect the county during this emergency time.”

In the order, the county is restricting the size of any gatherings in the county to no more than 10 people. This move follows stringent guidelines from the Centers for Disease Control and the Mississippi State Department of Health.

Additionally, beginning Wednesday, bars, nightclubs, lounges and taverns within the county shall close for the duration of the order, which currently extends until April 6. This move coincides with the city’s move Sunday to close similar businesses.

“With the city having passed its proclamation, we wanted to have consistency in terms of people leaving facilities in the city that are governed the way they are and then going into the county to escape those protective measures,” Board of Supervisors attorney Blake Teller said.

Also, restaurants within the county shall close dine-in services, but may provide food for pick-up, curbside service, delivery or drive-through services. Also, those establishments are restricted to no more than 10 people and customers on the premises. In addition to the restriction of services, restaurants must close by 11 p.m. and open no earlier than 5 a.m.

The order was unanimously approved by the supervisors. District 3 Supervisor Shawn Jackson was not in attendance.

“Our goals were to work really hard to support the idea to minimize the size of the groups, to be sure we were able to conform to the idea of a group no larger than 10 and to produce a proclamation that ensured we gave our law enforcement officials the opportunity to do that, while trying to leave the county in a situation in as much normalcy as we could possibly have,” Holland said.

In passing the proclamation, Holland said he understood the difficulty some have or will have in conforming to the restriction in gatherings of 10, calling it a “sacrifice” for many.

As for enforcing the new orders, Warren County Sheriff Martin Pace said the supervisors’ decision will benefit the community in its fight against the spread of the COVID-19 virus.

“The mission of the Sheriff’s Office is to protect life and property and this falls into that category. Our mission now is to enforce the executive order the Board of Supervisors has passed,” Pace said. “It is all to benefit the public. We have to fight this virus like anything else that would be a potential harm to this community.”

Ahead of Wednesday’s decision, Pace had already started talking to some of the businesses who would be affected by the order.

“Some of the businesses I have already spoken with have already complied to what is in this order, and they have done that on their own. I don’t foresee a big problem,” Pace said. “We hope that people will take this very seriously without having to be told to do this.”

Holland said that by setting the order through April 6, it will give supervisors a chance to review how effective the restrictions were during their next scheduled public meeting on that same date.