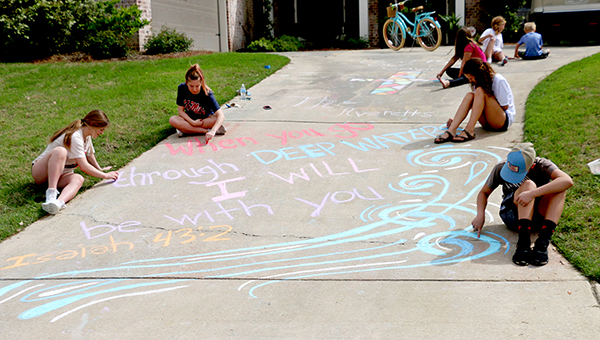 Children from the Twin Creeks neighborhood write out a Bible verse on a neighbor’s driveway Sunday afternoon. The neighborhood has held a “Chalk Your Walk” for the past two weekends to give hope and encouragement to those driving by. (Terri Cowart Frazier/The Vicksburg Post)

Desmond Tutu once said, “Hope is being able to see that there is light despite all of the darkness.” It is words like these of Tutu’s that can bring strength and optimism during troubled times.

With the outbreak of the COVID-19 virus, life has admittedly become more stressful and uncertain, leading some to take steps to remind others brighter days are ahead.

Sunday, residents in the Twin Creeks neighborhood decided to share their expressions of faith and hope by holding a “Chalk Your Walk,” which encourages homeowners to either draw or write encouraging messages or Bible verses on their driveways in chalk.

The program was shared on social media throughout the week, with a number of areas of Vicksburg and Warren County participating.

Holly Hood, a homeowner in Twin Creeks, said she had seen where other communities were holding a “Chalk Your Walk” and thought it would be something they could do.

“I thought it would be a fun, activity that would spread positive, uplifting messages,” Hood said.

In a neighborhood, “bustling with activity,” from riding bikes to visiting outside, Hood described her neighborhood as friendly and welcoming.

“If you need a cup of sugar or even something that’s not so common on everyone’s pantry shelf, you can pretty much count on someone in this neighborhood having it,” she said.

And with this type of comradery, she reached out to those in her community through GroupMe, a group messaging app, and received positive feedback from everyone. One of the neighbors even suggested they do Bible verses, Hood said, so that’s what they did.

Neighborhood homeowner, Bess Averett, said there are 43 children who live in Twin Creeks and many of them helped with the creative and colorful messages.

“It’s been fun writing the words,” Everett Sadler, 6. said. He added it had been his mom, however, who had been the one to pick out the Bible verse they wrote at the end of their driveway.

Addie Clay, 9, said she was excited to participate.

“When people come by, we can spread the Word,” she said of the messages written throughout the neighborhood.

Averett’s 11-year-old daughter, Annslee, said “Chalk Your Walk” had made her feel happy to do something for others.

“This is our way of supporting and encouraging others during the virus,” Annslee said.

This was the second time the neighborhood had held a “Chalk Your Walk.” They also held one the previous weekend.

“It was really neat to see when I was driving out of the neighborhood the next morning. It really made me smile,” Hood said. “I hope it made someone else smile too. I’m glad we did it again today.”