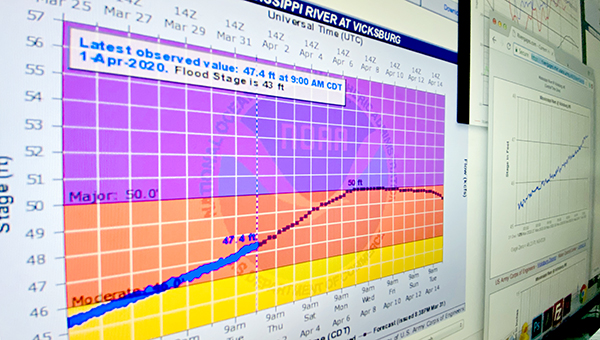 The Mississippi River is expected to crest in Vicksburg on April 7. (Tim Reeves/The Vicksburg Post)

The Mississippi River is expected to crest April 9 at 50 feet and then begin falling, a hydrologist with the National Weather Service Office in Jackson said.

The river’s stage at Vicksburg Monday was 49.1 feet. The river’s rise during the end of March forced the U.S. Army Corps of Engineers Vicksburg District to close the Steele Bayou Control Structure March 30. The level in the backwater is predicted to reach between 96 and 96.5 feet.

“Cairo is getting close to the crest. The reservoir at Barton, Ky., is holding water; they’ve dropped their discharges back a little bit, looking probably to knock that crest out,” he said. “They were holding a little bit of water, and it looks like Kentucky is going to be releasing some to get their pool back down again.”

The Ohio River was at 51.5 feet at Cairo, Ill., where the Ohio and Mississippi rivers merge. It is expected to fall to 42.5 feet by Saturday.

“As far as the forecasts for the Ohio and Mississippi basins, he said, the heavy rains will stay away.

“We’ll probably see Cairo stay flat for a while,” he said.

When the Mississippi crested at Vicksburg in February, it was predicted to drop below its 43-foot flood stage, but never reached that level.

“They just kept getting more rain in the Ohio Valley, and the 14-day rainfall still shows a lot of rain; they’ve had anywhere from 3-5 inches in the Ohio Valley,” Pope said. “In upper Michigan, a mix of snowmelt and some rainfall from up there came down.”

Presently, Pope said everything is similar to what it was or slightly higher than it was in February.

“Hopefully, we’ll get it turned around and get everything going down,” he said. “So far, it’s been pretty nice; we haven’t had to have nothing like last year, yet.”