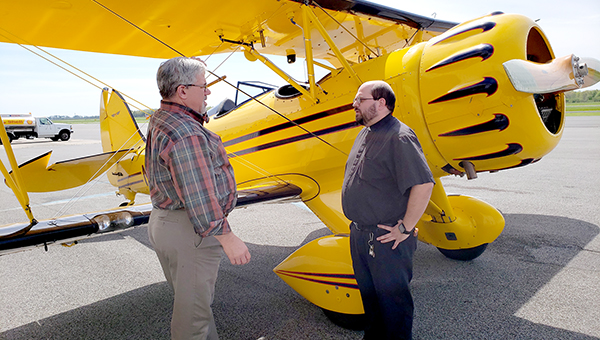 MOUND, La. — Thursday afternoon, the city of Vicksburg received a blessing from above.

About 2:30 pm. Thursday, the Rev. Rusty Vincent, pastor of St. Paul Catholic Church, took to the skies in an open seat biplane piloted by Dan Fordice to spread holy water over the city in a blessing to help the city.

Vincent said he got the idea from parishioner Charles Hahn, who read about some priests in the north who flew over cities and prayed for God’s blessing on the community.

Vincent and Fordice flew from the Vicksburg-Tallulah Regional Airport in a twin-seat WACO biplane owned by the Southern Heritage Air Foundation. The holy water was sprinkled using a funnel and a long plastic tube.

Hahn said he got the idea for the flyover after reading an article in the Knights of Columbus publication “Knightline.”

According to the article, the Rev. Brian Gannon, the pastor of St. Theresa Catholic Church in Bridgeport, Conn., and an associate pastor on March 24 flew over their city. During the flight, the priests recited the rosary, the Memorare to the Blessed Mother and prayed for protection against the virus.

“The next thing was finding the date, and this (Thursday) turned out to be the best date.”

“Tell Dan thank you for doing this for our city.  I had such a feeling of calmness as I watched it fly over. Father Rusty shows such loving feelings for his community.

“(I) hope God hears our prayers and helps us keep each other safe and well,” Blanche wrote.

“We spotted Father Rusty!! So cool! Thanks to all involved!!” Laura Blackledge Kidder wrote.