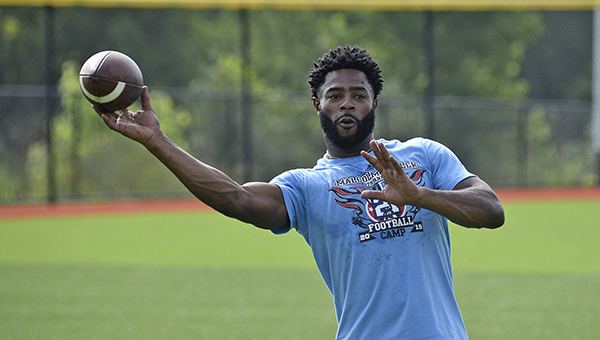 All throughout his remarkable football career, Malcolm Butler has gained something at each of his many stops.

A strong foundation at Vicksburg High School. A second chance from Hinds Community College. Stardom from the New England Patriots. Money from the Tennessee Titans.

From the University of West Alabama, he says, he gained something invaluable.

“I don’t think I’d have gone to any other school rather than West Alabama,” Butler said. “If I would have went to a D-I school or somewhere like that I probably wouldn’t have that much hunger and fight and scrap to do what I had to do, to get where I had to get. That conference pushed me very hard and got me to some amazing places in my life.”

The next place it’s gotten him to is the hall of fame.

Butler, who played two seasons at West Alabama before heading on to NFL stardom, was announced as one of six new members of the Gulf South Conference Hall of Fame on Thursday.

“It’s a great, great, great honor. This is another big accomplishment for me in my career, similar to the Super Bowl catch and all of the other success I’ve had. This one, I will most definitely keep close to my heart. I’ll be appreciative of it,” Butler said. “It’s an honor, man. Hall of Fame in the NFL, college, high school, coaching, it doesn’t matter. Hall of fame anywhere, in any category, any situation, it’s just a great honor. I am so happy. I want to thank everyone that supported me and the Gulf South Conference and West Alabama.”

Butler was kicked off the team at Hinds in 2009, but given a second chance that he made the most of. He wound up earning a scholarship at Division II West Alabama and took his game to the next level.

Butler was named to the All-Gulf South Conference team in 2012 and 2013, and also earned Division II All-America honors in his senior season. He had 45 tackles, two interceptions and three pass breakups in 2013.
From West Alabama, he signed as an undrafted free agent with the New England Patriots in 2014 and went on to win two Super Bowls with the franchise — including Super Bowl XLIX against Seattle, when he made the game-clinching interception at the goal line in the final minute.

Butler signed as a free agent with the Tennessee Titans in 2018. In six NFL seasons he has played in 84 games and has 13 career interceptions.

None of it, he said, could have happened without his time at West Alabama.

“I had great coaches. Great people over there that made me want to go to that school. And I just knew that when I went there I had to handle business,” Butler said. “I was given a second chance. My hunger and motivation were off the meters. I’m grateful to West Alabama and the GSC. I found myself.”