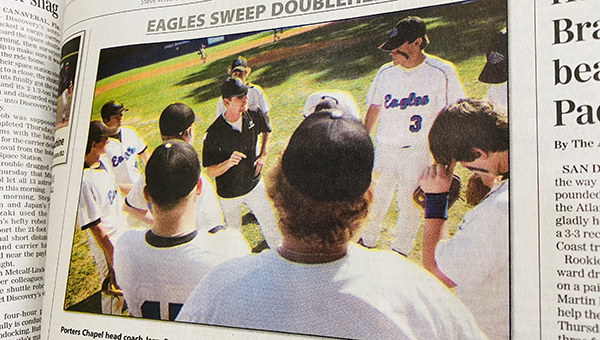 Porter's Chapel head baseball coach Jerry Bourne speaks to his team before a doubleheader in this photograph in The Vicksburg Post from April 2010.

Old Post Files is a regular feature in the print version of The Vicksburg Post looking back at the top headlines and stories pulled from cataloged copies of the newspaper. Here’s a look back over the decades.

Hardy Jones and Mrs. Charles Peyton are speakers at a meeting of the Progressive Home Demonstration Club. • A picture of the sports page of the Vicksburg Evening Post describes Red Will as “$200,000 worth of slugging talent.”

A contract for construction of the Holiday Inn here is let to W.T. Walker Company, general contractors. • Mr. and Mrs. R.F. Evans and son, George, are visiting relatives in New Orleans. • Cameron Mitchell stars in “Face of Fire” at the Joy Theatre.

Mrs. Thelma Kinnard Smith of Utica dies. • Linda Monk of Vicksburg receives the Taylor Medal Citation in English and political science during Honors Day ceremonies at the University of Mississippi.

Vicksburg native Amzi Thames returns to the city to take over operations of The Hub men’s store. • Paul Kenny is recognized for 10 years of service at East Fabricators. • David and Kristie Pierce announce the birth of twin daughters, Ellen Elizabeth and Olivia Madeline, born April 12.