Vicksburg hairstylist: ‘We are so ready and prepared’ 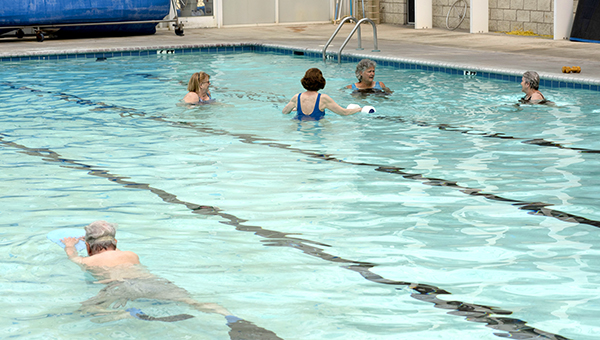 The Purks YMCA in Vicksburg weclomed back swimmers to the facility’s pool Thursday. The YMCA had closed the pool for a number of weeks due to restrictions connected to the spread of the COVID-19 virus. (Courtland Wells/The Vicksburg Post)

Everybody (back) into the pool!

The Vicksburg YMCA announced Wednesday its plans to reopen swimming pools at its Purks and Wilkinson Ver Beck facilities in accordance with COVID-19 guidelines laid out by Mississippi Gov. Tate Reeves earlier this week.

The indoor pool at the Purks YMCA off of East Clay Street reopened Thursday morning. The outdoor pool at the Wilkinson Ver Beck YMCA on Oak Ridge Road will reopen Monday.

Vicksburg YMCA executive director Phillip Doiron said guidelines for swimming pools were included among the provisions Gov. Reeves set out for recreational facilities, and Vicksburg mayor George Flaggs Jr. signed off on it.

“It wasn’t mentioned in the summary, but when I read the order one of the stipulations specifically mentions swimming pools. I called Mayor (George) Flaggs and he gave us his blessing,” Doiron said. “It’s like a slice of normal life. It’s funny how much you miss it until you can’t do something.”

Both pools will have plenty of rules and policies in place to ensure the safety of swimmers and staff, and stay in line with the guidelines laid out by the governor, city and county governments, and the Centers for Disease Control.

The Wilkinson Ver Beck pool will be for families and open to swimmers seven days per week, with a maximum of 18 people per hour. It will be open from 9 a.m. to 7 p.m. on weekdays, and 1 to 5 p.m. on Saturday and Sunday.

Reservations can only be made 24 hours in advance, and are limited to YMCA members and their immediate family.

“It’s very small numbers, but it’s a heckuva lot more than we can do right now,” Doiron said. “I think we’re going to have enough spots to serve the need initially, because there’s going to be some hesitancy for people to come out.”

Limiting the number of swimmers allows the YMCA to stay in compliance with social distancing guidelines, and Doiron said the staff will make a concerted effort to ensure both facilities are cleaned regularly. The 1 hour 45 minute time slots at the Wilkinson Ver Beck YMCA are intended to give staff 15 minutes to clean the pool deck and restrooms before the next group comes in.

Doiron said chlorine and other chemicals in the pool water serve as a disinfectant, and that the water itself was safe.

“We can’t, in reality, clean after everyone walks in, but we’re going to clean as often as we can,” Doiron said. “We’ve been working behind the scenes very diligently for when we can open — not just for our members’ safety, but the staff’s safety — and we want people to leave after letting the YMCA be a release in their life.”

The Learn to Swim program, which provides low-cost lessons for children and adults, has been suspended until further notice. Gurtowski said the lessons require close contact between swimmers and instructors that make it impossible to conduct them while complying with social distancing guidelines.