History of pesticides includes a healthy dose of ‘tobacco… 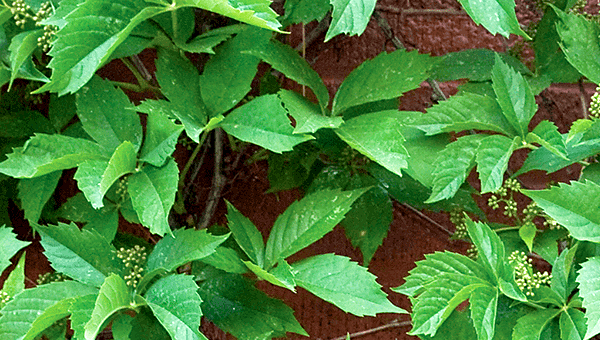 Virginia creeper has ‘leaves of five, let it thrive’

A mistake people without much experience outdoors can make is to not recognize Virginia creeper. The woody stem perennial vine is sometimes mistaken as poison ivy.

I suppose there is no harm done by thinking a Virginia creeper vine is poison ivy since that would cause a person to stay clear. But anybody taking care of a landscape needs to know the two are not the same.

Virginia creeper won’t cause human hide to break out in an itchy rash like poison ivy does for the majority of us. Locally, of all the natural vines growing up tree trunks and utility poles, Virginia creeper accounts for most of them.

But when someone sets out to remove wild vines to pretty up the yard, he or she darn well needs to know whether or not they are grabbing hold of a plant loaded with the toxic oil urushiol in the leaves, stems and roots.

The two vines Virginia creeper and poison ivy are not closely related. Poison ivy and poison oak are close kin. They are different species within the same genus.

Poison oak also contains urushirol and has the same leaf setup as poison ivy. Distinguishing between Virginia creeper and poison ivy is not hard to do during most of the year when leaves are present. The leaves are the easiest indicators of which is which. Both have compound leaves, meaning multiple leaflets form the whole leaf. Virginia creeper has five leaflets per leaf, poison ivy has three.

Folks used to use a saying to remember the difference. “Leaves of three, leave it be. Leaves of five, let it thrive.”

I suppose rhyming is a good way to distinguish between the two but doesn’t leave it be and let it thrive mean the same thing? I’ve spent years on my place not letting either one of them be or thrive.

I see garden writings about growing Virginia creeper on purpose as an ornamental vine on a fence or trellis.

Way back when I took a landscape design course, there was another native vine that was listed as an ornamental plant in horticulture and still is by some but regarded as a nuisance weed in crops and pastures. It is trumpet creeper, which we do have growing here. It contains a skin irritant, though milder than poison ivy.

At least trumpet creeper comes with its namesake orange funnel-like, humming bird-friendly blooms that add summer color. Of course, if it’s your barb wire fence being pulled downwards or your cotton plants being choked out, it’s understandable how trumpet creeper is deemed a weed and a very tough one once it takes hold.

Lest I leave the impression Virginia creeper cannot hamper human health, let me fix that.

Both Virginia creeper and the even better known Wisteria contain a substance that can make mammals sick to the stomach and sore to the mouth. But the plant has to be chewed or swallowed to do us harm. Just watch out for young kiddies fooling with wisteria seedpods.