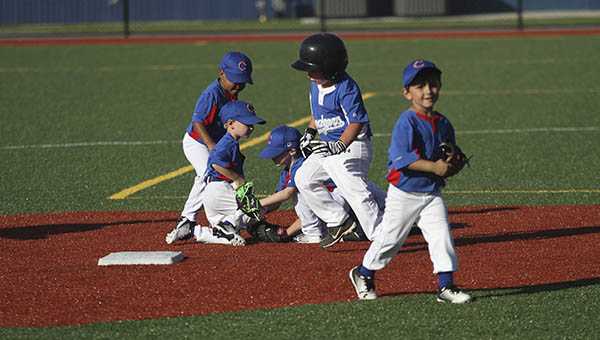 Players with the Vicksburg Warren Athletic Association compete in a youth baseball game last season at Sports Force Parks on the Mississippi. The facility is hoping to reopen soon as COVID-19 restrictions at the state and local level are lifted. (Courtland Wells/The Vicksburg Post)

As segments of the local and state economy begin to reopen, tourism remains heavily restricted, primarily due to the limitations placed on the size of gatherings.

One such area of Vicksburg’s tourism economy that appears poised to reopen is youth sports, but it remains unclear as to when state restrictions will be lifted. But Wednesday, facilities such as Sports Force Parks on the Mississippi, and even the city’s parks and recreation department, got a glimmer of hope that their shutdown might be coming to an end.

“The State Health Department, Dr. [Thomas] Dobbs and I are having good conversations about ways to get those parks back open in a safe and responsible way,” Gov. Tate Reeves said during his daily press conference Wednesday. “We are very near, I think, to putting out guidelines to make sure that we will protect the individuals.”

Sports Force Parks on the Mississippi, which opened in February 2019, was on pace to have a strong second year before having to shut down in mid-March due to the spread of the COVID-19 virus.

In 2019, with just a few months of operation, the facility had a more than $12.4 million impact on the local economy, a level they were on pace to easily surpass in 2020.

Two weeks ago, Reeves amended his executive order that expanded the number of people allowed in any one gathering from 10 to 20 and allowed parks and recreation facilities to reopen. But, the limit of 20 people prevented any tournaments or games to be held until the number was increased.

Memorial Day had been a traditional kickoff to a busy time of year for facilities like Sports Force, who host tournaments every weekend, sometimes hosting multiple tournaments featuring multiple sports. The company’s website showed a tournament scheduled for the Memorial Day weekend, but Reeves said Wednesday, the lifting of restrictions by this weekend is unlikely.

“As you know, we made a decision a week or so ago to allow practices when we expanded the number of people from 10 to 20 in outdoor gatherings so that kids can get back on the field and be throwing and such things as that,” Reeves said. “I don’t think it will be by this weekend. But I do think it will be very, very soon we will have the opportunity to get back playing ball not only for practice but also for tournaments.”

Reeves said facilities like Sports Force Parks in Vicksburg, which he called one of the “Premier parks in Mississippi and thus one of the premier parks in America,” serve an important function in the state, especially now as residents work to regain some normalcy from the COVID-19 restrictions.

“As we talked about, the mental health issues from COVID-19 are so very challenging. Not only do our adults that work need some sense of normalcy, but our kids need a sense of normalcy,” Reeves said. “Getting them back on the ballfields will help that. We have just got to make sure we are at a point where we can do it in a safe and responsible way.”

In addition to weekend tournaments, Sports Force Parks on the Mississippi is the host facility for the Vicksburg Warren Athletic Association, which coordinates the youth recreation baseball league in the county. Officials with that organization expect their delayed season — which would have started in April — to return likely in August.