Remembering Gene Presley: ‘He was a super nice guy… 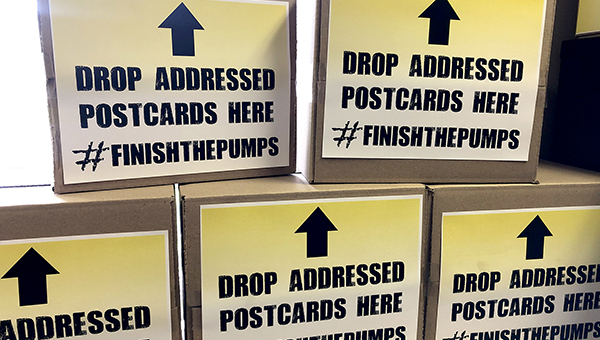 Boxes like these, along with comment cards supporting the completion of the backwater pumps project, can be found through the Yazoo Backwater Area. For a full list of locations, visit facebook.com/finishthepumps.

For some it is a slogan they share on Facebook. For others, it is a saying that adorns a bumper sticker placed on their back window.

And yet for others, like Stormy Deere, Victoria Darden and the hundreds who have battled floodwaters far longer than they ever should have, “finish the pumps” is part of their everyday lives.

In the midst of last year’s devastating historic Yazoo Backwater Area Flood, the national media — and the eyes of most everyone in Mississippi — eventually turned their attention to the backwater area and the months-long flood that covered hundreds of thousands of acres, destroyed hundreds of homes and structures, killed untold wildlife and all but wrecked neighborhoods and communities for years to come.

It was during that time that “finish the pumps” grew from something a few would say, to a rallying cry for an entire community, an entire region and the better part of the state of Mississippi.

And it is thanks to that attention, that rallying cry, and the work of Deere, Darden and so many others, that there is a renewed push by lawmakers to complete a federal flood plan that would install the same pumps that the Environmental Protection Agency vetoed in 2008.

Now, the U.S. Army Corps of Engineers is doing preliminary studies and environmental work in the region — part of the early steps to one day complete the pumps portion of the project. Part of that process also includes feedback from residents, offering either support or opposition to the completion of the project.

In 2007, the veto was supported by tens of thousands that were in opposition to the completion of the pumps, while those supporting the project could only garner the support of just a few hundred.

That is where the now well-organized group Finish The Pumps — a group organized to advocate and lobby for the backwater pumps project — comes in.

“The Corps of Engineers right now is working on the environmental impact study, and part of that is soliciting feedback from the public,” Deere said. “They have to do it three times and this is the first time.”

Deere said that while she is unsure if the group will obtain 47,000 responses — the number environmental groups were able to rally in 2007 in opposition to the pumps, — the group’s goal is to get as many as they can.

But she knows to reach that number, it will take reaching out to more people than just those living in Warren County and other parts of the backwater area.

And for Deere, the passion she brings to this effort is more than just a slogan. It’s personal.

During last year’s flood, she and her family saw floodwaters rise tremendously close to their house, covering their driveway and blocking access. Beginning on March 16, the family was forced to boat from their home to vehicles near the road, a practice that lasted all the way through the end of August.

And, it happened again this year, although the flooding this year received far less coverage due to COVID-19. Their driveway was again covered this year beginning in February, forcing the family to boat to and from their home to their cars yet another time. Only in early May did the water subside enough to allow them to again use their driveway.

The group has placed collection boxes and cards at locations throughout Warren County and neighboring communities to garner community feedback.

“If someone cannot get to a box, or if they are still socially distancing and they want to stay home, then they can send a hand-written letter or send an email,” Deere said.

Finish The Pumps continues to reach out to the community, sharing information through their Facebook page at facebook.com/finishthepumps.

Deere said if anyone has questions or needs information on the need for comments, they can send a private message to the group through Facebook and they will respond.

The deadline to submit the comments to the U.S. Army Corps of Engineers is June 15.

Emails in support of the pumps should be sent to YazooBackwater@usace.army.mil.