In just a short time, we have come to… 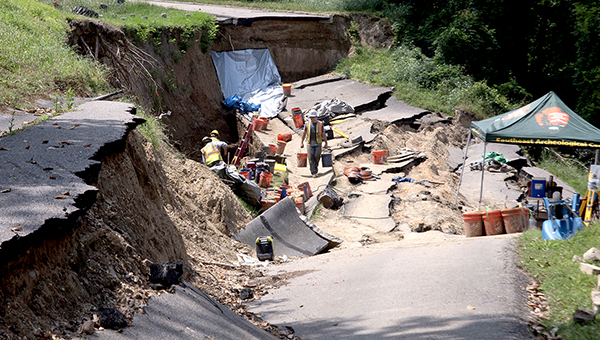 Archaeologists with the Southeast Archeological Center work at the site of the landslide at the Vicksburg National Cemetery. (Courtland Wells/The Vicksburg Post)

For the past month, a team of archeologists from the National Park Service Southeast Archeological Center has been working to save heroes whose final resting place was disturbed by Mother Nature.

In mid-February, heavy rains affected an area of the Vicksburg National Cemetery known as Section T causing a landslide that took part of a slope and the cemetery’s road, which was in the path of the slide.

“What happened was when the land tried to curve, it actually pulled off a portion of the terrace in Section T,” said Dawn Lawrence, the team’s principal investigator, as she pointed in the direction of the slide damage. “About 13 graves were affected in some way. Some were just headstones, at least nine burials came down; some were whole, some were partial. They continued to be pulled as the landslide keeps going downward.

“This is my third time coming here to assess the damage and it’s gotten progressively worse with the rain over the past couple of months,” she said.

Lawrence said the work going on now in the cemetery is basically a recovery mission being done according to archeological specifications.

“We are here to figure out where the burials were,” she said. “With the history of the cemetery, we have questions as to whether there were really burials under some of these headstones. We’re trying to see if there are people under there, if so, how many, and digging to 20-centimeter level (about 8 inches) until we saw a grave shaft or bones.”

The majority of the people buried at the cemetery — about 75 percent including section T — are unknown soldiers, Lawrence said, because they were removed from other locations where they were hastily buried after the battle.

The wooden headstones left to identify the fallen soldier, she said, decayed or were deliberately burned and removed by the time the bodies were recovered.

“A lot of this was done on farmers’ land, so some of those (markers) may have been deliberately destroyed, and basically over the course of time it took for the establishment of the National Cemetery, the identity of these people was lost; they are no longer known. All are Union soldiers,” she said. “We don’t know specifically where they came from. Most of the Vicksburg soldiers who died in the siege are here, but they did spread out and go to other states as well to find the Union dead and bring them here.

“I know there were a lot of burials along the river from the siege, so most of those are here,” she said.

Wherever there were battles or field hospitals, Lawrence said, officials would go and seek out those areas. They would ask residents what they remembered as a way of gathering information to find dead soldiers and take them to the National Cemetery.

“We’re digging to find the individuals and we are disinterring them for the second time. We’re going to remove them so they can be reinterred elsewhere in the cemetery and that will allow them to repair the landslide without affecting the burial.”

“The reason we’re going 20-centimeter levels in the top layer is because the whole cemetery has been so extensively landscaped and terraced over the years that we’re finding pennies from 1964 about 50, 60, 70 centimeters (1.6 to 2.3 feet) down,” she said. “There’s a lot of migration of historic junk through the top levels and we are able to see changes in the soil when we go down through the grave shaft, and grave shaft is just what it sounds like. That is the hole they dug to place the coffin.”

When the grave is filled, she said, the soil is mixed up and the different colors of soil are present, basically in a rectangle.

“When we see that, we start to become really precise,” she said. “Instead of a shovel, we start to use trowels and other tools in order to reach the burial without damaging it.”

Research on the cemetery, Lawrence said, indicates the affected bodies were reburied in the National Cemetery between 1866 and 1870. At that time, she said, officials were doing about 16 burials a day.

“When I came out in March, when the problem was declared an emergency and the National Park Service sent out an incident management team; at that point, there was some human bone that had been exposed and we knew that the burials were severely impacted,” she said.

Lawrence said the disturbed graves were located using a map from the cemetery. When the terrace fell, she said, it fell in a way that was mostly horizontal so the headstones were still up.

“So we had a pretty good idea which way people were going and so that’s where we put our unit, and as we found part of that grave shaft or a corner, we continued to spread out and keep digging in that direction,” she said.

Of the affected graves, she said, there may have been some bones that came out of sites, and some remains have completely fallen.

“That’s what we’re working to determine,” Lawrence said. “We want to be able to re-associate any bones that may have fallen out with the correct individual. At the end of the day we want these folks to stay together so they can be reinterred; all the correct bones with the correct person.”

Once the remains are saved, Lawrence said the next phase for the archeologists is an analysis phase.

“These are unknown soldiers and at this point in time having the indignity of being dug up once, falling down in a landslide, we really want to have that opportunity to tell their story as much as we can,” she said.

She said the bones of the soldiers will be examined to determine their age, their sex, whether disease or trauma contributed to their death, and their ancestry.

“We will look for muscle tissue connection. Every bone has muscle markers where those muscles do attach and that can tell you about the elasticity of that person, how strong they were,” Lawrence said. “Features can tell history. Once we have the skeleton, every bone will tell us some story, there may be a fracture, we haven’t found any with bullets at this point, we know disease killed a lot of people, some times more than actual battle.

“The folks we have seen so far have fractures, but they’re well healed, so these were injuries they received many years earlier.”

Lawrence said the team’s work took on added significance because it was carried out during the anniversary of the start of the Siege of Vicksburg and heading into the Memorial Day weekend.

“My crew is so aware (of the history),” she said. “This is a crew that volunteered during a pandemic. It was those willing to come with me and do this really important emergency work.”

She said a park ranger took the team on a trip in the park to the Stockade Redan on the anniversary of the start of the siege, adding, “It was very touching.”

“We knew every day that we waited, this landslide could get worse and our chances of recovering any soldiers would be getting smaller and smaller. We put together a crew of people who were willing to risk traveling from Florida to Mississippi and stay here for three weeks in the current climate situation this is,” she said. “They knew how important this work was but to them to be hearing about the siege of Vicksburg and Memorial Day coming up, it lends so much weight to everything that we’re doing and it really connects us to the work.”