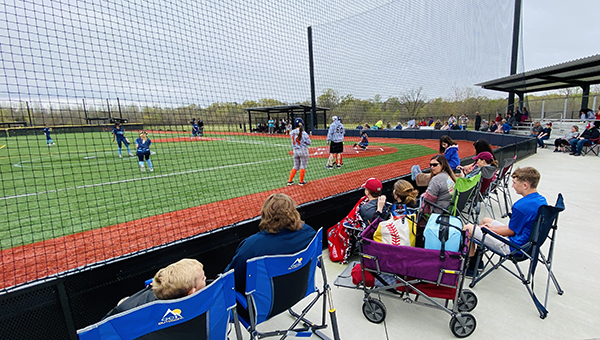 This softball game in mid-March was one of the final events hosted at Sports Force Parks on the Mississippi before local and state restrictions forced the park, and other sports facilities to close. The restrictions were put in place to curtail the spread of the COVID-19 virus. (Tim Reeves/The Vicksburg Post)

Within hours of Gov. Tate Reeves’ announcement Wednesday that he would not extend the state’s “Safer At Home” order after it expires Monday morning, businesses, organizations and youth sports leagues that had remained restricted began announcing reopening plans.

The easing of restrictions — particularly those involving youth sports — is a big boost for Vicksburg’s local economy.

Increasing the number of people who can gather at outdoor facilities with social distancing guidelines to 100 means Sports Force Parks on the Mississippi can resume hosting tournaments.

Brian Storm, Sports Fields Inc. CEO, said Thursday the 2-year-old facility will begin hosting tournaments as early as next weekend and is looking to restart a year that started off strong before being shut down in mid-March.

Sports Fields Inc. is the parent company of Sports Force Parks on the Mississippi.

“We were off to a fantastic start,” Storm said. “But, I’m an old football coach and have seen plenty of comeback wins in the fourth quarter. We still have the potential to have a great year.”

Storm said his team has been working to find creative ways to make up for a shutdown that will have lasted 11 weeks; a shutdown that cost the park and the local economy more than 300 teams.

“That is a conservative number,” Storm said of the 300-team figure. “Given the shutdown came during a peak time of the year, it might actually have meant more than 400 teams.”

Storm also said the loss of those teams, along with the family and friends who join them for weekend tournaments, meant a loss of more than $5 million in overall economic impact on the local economy. “And that’s just a quick estimate,” Storm said. “Given the loss of business to hotels, restaurants and other businesses, that impact could be far more.”

He said his team is ready to get back to work rather than “making work,” Storm said, adding the company, which owns facilities in multiple states, did not cut any full-time employees during the shutdown, but did not retain many of the part-time employees.

In addition to a collegiate-level development league that will host events at the park in the coming months, Storm said there are plans to add other sporting and entertainment events over the coming months to make-up for any losses and help the local economy quickly recover.

“As we have talked to city officials in recent weeks, we have told them that we want to be part of the solution, part of helping the local economy recover,” Storm said.

Friday, Mayor George Flaggs Jr. followed Reeves’ lead by changing the city’s civil emergency orders to allow not only Sports Force Parks on the Mississippi to resume operations Monday, but other businesses as well.

One thing that will remain in the city’s order, which is set to expire July 15, is the city’s juvenile curfew.

The curfew prohibits juveniles 17 and under from being outdoors without supervision between 7:30 p.m. and 7:30 a.m.

Flaggs said Friday he expects the curfew will expire on July 15 and not be renewed.