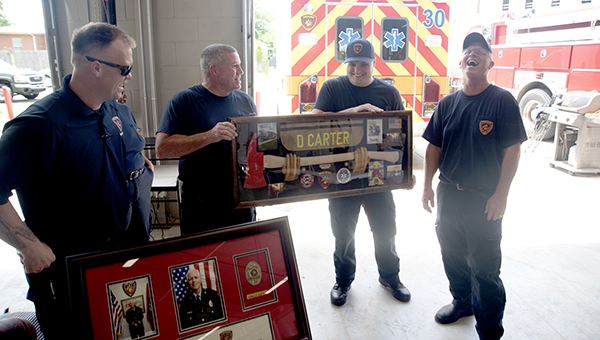 On May 29, 1991, Donald Carter joined the Vicksburg Fire Department as a firefighter.

“I got out of the military and was looking for a job and my dad said, ‘Hey, look at this.’ It just seemed to fit,” he said. “It was kind of like the military.”

Friday afternoon, 29 years to the day after he joined the fire department, Carter was honored on his retirement from the department as a lieutenant on A shift at a reception at Station 3.

Danczyk’s comments were followed by South Ward Alderman Alex Monsour, who presented a plaque on behalf of the city commending Carter for his service.

The fire department honored Carter with his badge and photos from his career and a “retired” cap and T-shirt, and the members of his shift presented him with a framed ax with his name patch from his turnout gear.

Carter served in the U.S. Air Force before joining the fire department. He became an EMT and was promoted to lieutenant June 7, 1995. He officially retired Saturday at 7 a.m.

He will have a short time to enjoy his retirement from the department.

Monday he goes to work at the Continental Tire plant in Hinds County as a member of its fire service team.

“I’m going to be working for a company called IES,” he said. “They are a contractor and they have the contract for the fire service for Continental Tire. It will allow me to get home at night. I won’t have to spend the night here (Station 3) every third night.”