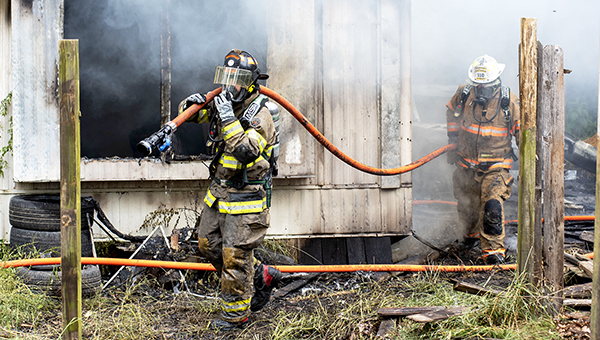 Bovina and Culkin Fire Departments responded to a structure and vehicle fire that began about 12:19 p.m. on Oak Ridge Road Tuesday. The cause of the fire is under investigation by the Mississippi State Fire Marshal and Warren County Sheriff’s Office. (Courtland Wells/The Vicksburg Post)

A noontime fire heavily damaged a car and a nearby mobile home at the intersection of Oak Ridge and Tucker roads Tuesday.

Sheriff Martin Pace said Vicksburg-Warren 911 received calls sometime after 12:15 p.m. from residents in the Oak Ridge are about a car and a house trailer on fire in the 2600 block Oak Ridge Road.

Chuck Tate with the Culkin Volunteer Fire Department said firefighters called to the fire arrived to find the car and the mobile home on fire.

Pace said the fire is being investigated by the Mississippi State Fire Marshal and the Warren County Sheriff’s Office to determine the cause and origin of the fire.

“No one was home and no one was injured in the fire,” he said. Pace said the residents of the mobile home were in the process of moving out of the home.

He said deputies are looking for a car that was seen leaving the area as the 911 calls were coming in.

“We just want to talk to the individual to see if they might be able to assist us in the investigation,” Pace said. Deputies in the area later saw a car matching the description of the vehicle seen leaving the scene at U.S. 61 North and Oak Ridge Road.

They attempted to stop it and talk to the driver, but it drove off at a high rate of speed from U.S. 61 North.

Pace said the deputies pursued the car, which went east on Interstate 20, but stopped the pursuit for safety reasons when the chase reached a construction area.

Pace said authorities were not sure if the car was related to the fire.