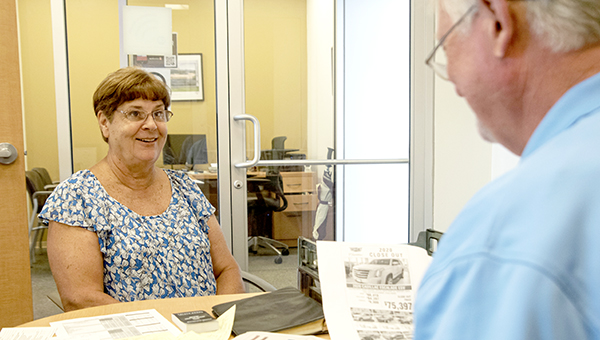 Sheila Mantz is a familiar face in the community.

As a marketing sales consultant for The Vicksburg Post, she has made phone calls, knocked on doors, and covered no telling how many miles of territory both in her vehicle and on foot while doing her job.

Now after more than 20 years with The Post, and with a total of 40 years in sales, she has decided it is time to retire. Friday marks her final day.

“I have never set still in my life,” Mantz said. “However my husband, Stephen, needs more of my time.”

Originally from Ohio, Mantz and her husband decided they wanted to move south where the weather was milder, and Vicksburg seemed like the perfect place to land.

Mantz’s husband had worked in the lumber business for a number of years, and after deciding they wanted to make a move, he was offered jobs at three lumber facilities, one of which was in Vicksburg.

“My husband is a history major from college days and loves it so much. It was not a hard decision when we visited, and we also fell in love with Vicksburg because it reminded us of our hometown a lot,” Mantz said.

Prior to moving to Vicksburg, Mantz had been the manager of a special publication division of an Ohio daily newspaper, making the transition to The Post in 1999 seamless.

“When I moved to Vicksburg and started my career at The Vicksburg Post, I was embraced by the Cashman Family,” Mantz said.

“Sheila was a good friend and great salesperson,” Pat Cashman said. “She was welcomed into the staff and everybody liked Sheila.”

Mantz also acknowledged other colleagues at The Vicksburg Post.

“I want to thank everyone for their kindness and friendships over the years at The Vicksburg Post,” she said. “I have met so many great people through my years at the paper, with so many great memories.”

In addition to her co-workers, Mantz said, she has also developed valuable friendships through her 21-year career sales position at The Post.

Not only had she been there in the good times, but she has also been there when times were tough.

“That’s just the kind of person she is,” he said.

“She would get excited,” when Carr had a good week, “But she would also empathize with the pressure I was under and was genuinely concerned when things were tough,” Carr said. “I have never had a bad rep, but Sheila has been special.”

While Mantz will be missed at the car dealership, Carr said, he is happy for her upcoming retirement.

“Maybe she will take some time now and smell the roses because she has earned it,” he said. “She was a hard worker and did a good job. I hate to see her go. I love her to death and wish her the best.”

Catherine Hadaway, publisher of The Vicksburg Post, thanked Mantz for her many years of service to the newspaper.

“Sheila has been an integral part of The Vicksburg Post for many years,” she said. “She is deeply appreciated for the time she has spent getting to know businesses in the Vicksburg Warren community and assisting them with their business goals and advertising needs.

“She will be missed by her friends at The Post. We wish her the best in retirement.”

While retiring from The Vicksburg Post will allow Mantz more time with her husband, she said it will also give her the freedom to assist others in her family.

“My family has several businesses locally and in my spare time I will be helping them,” she said.