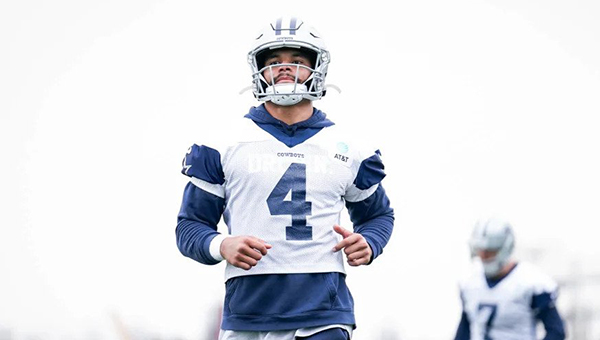 DALLAS (AP) — Dallas Cowboys quarterback Dak Prescott says he is pledging $1 million “to improve our police training and address systematic racism through education and advocacy in our country.”

Prescott, a former Mississippi State star, made the pledge at the end of a lengthy statement on Instagram in his first public comments over widespread unrest sparked by the death of George Floyd. The handcuffed black man died after a white Minneapolis police officer pressed his knee into Floyd’s neck for several minutes as he pleaded for air and eventually stopped moving.

Prescott wrote that he had respect for law enforcement officers but implored them to “hold your own accountable.” He said he viewed the “protests and riots in our streets as a form of strength” in the effort to raise awareness of racial injustice. Two paragraphs later, he wrote, “I do not believe in looting or that violence is the answer.”

“I have the utmost respect for those of you with a passion for protecting and serving your communities. When you chose to wear the badge of a police officer, you pledged to protect life and property through the enforcement of our laws and regulations. How can you claim to uphold the law when those within your own ranks don’t abide by it? You need to hold your own accountable!” Prescott wrote. “Each of you are as guilty as the men who stood beside Derek Chauvin if you do not stand up against the systemic racism plaguing our police forces nationwide. Take action!

“As long as cops continue to profile blacks as a threat, cops will continue to be perceived as untrustworthy. You have to change yourself before you can ask anyone else to change!” Prescott added.

The 2016 NFL Offensive Rookie of the Year said he was having a difficult time without football during the pandemic. Prescott also publicly acknowledged the recent death of his older brother, Jace Prescott, for the first time. The 31-year-old former offensive lineman at Northwestern State in Louisiana died in April.

Prescott isn’t participating in the Cowboys’ virtual offseason program because he hasn’t signed the $31 million one-year contract that goes with the franchise tag. The sides have until July 15 to reach a deal on a long-term contract. The two-time Pro Bowler just finished a four-year rookie contract that paid Prescott $2 million in the final season.