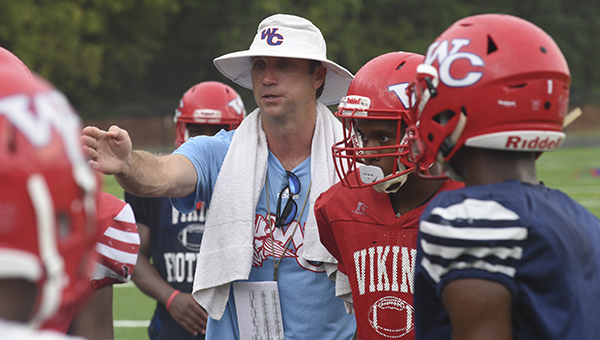 Warren Central football head coach Josh Morgan gives instructions during a practice in August 2019. Warren Central and Vicksburg will begin their summer workouts on June 15, after a delay caused by the COVID-19 pandemic. (File/The Vicksburg Post)

Football season will, unofficially, begin on June 15 for Warren Central and Vicksburg High.

That’s the date when both teams will be allowed to start conditioning drills and offseason workouts — with plenty of restrictions and precautions to prevent the spread of the COVID-19 virus — under a plan approved last week by the Vicksburg Warren School District Board of Trustees.

June 15 will mark the start of a two-week physical acclimatization period for players. Full offseason practices can resume July 1, and will likely flow into the regular season in August.

Cross country will follow the same schedule as varsity football, while volleyball and junior high football will begin their conditioning period on July 1.

VWSD athletic director Preston Nailor said the goal once workouts resume is to get players back in shape and adjusted to the heat, after three months of no organized activity. Football, in particular, lost its spring practice period and months of weight training and conditioning work when the Mississippi High School Activities Association suspended all activities in mid-March because of the COVID-19 pandemic.

Warren Central and Vicksburg are both scheduled to start the regular season in the Red Carpet Bowl on Aug. 21 at Warren Central.

“That’s the plan. You don’t want to start and then stop. We are preparing as if we’re going back to school at the regular time,” Nailor said. “Coronavirus is a big issue, but the biggest issue is these kids getting acclimated to the heat in case we do go back to regular school or play, so we have everything in place to protect the kids as well.”

Because of the emphasis on social distancing and hygiene, football practice at Warren Central and Vicksburg High will look a bit different when it resumes.

Players will be broken into groups of no more than 20 — most likely according to position — and spread out to different areas. Nearby baseball and softball fields, practice fields and fields at stadiums will all be used. Workout groups will remain the same each day to limit potential exposure to the virus.

Locker rooms cannot be used. Players must arrive dressed for workouts, and then leave immediately after they finish and shower at home. No equipment — including balls — will be shared during the first 30 days, and any weightlifting exercises that require a spotter are not allowed.

Coaches must clean and disinfect all weights, racks and restrooms daily, and lock the doors or gates to all facilities at the conclusion of the workouts.

Coaches and players must also be screened for COVID-19 symptoms each day upon arrival.
All of the summer workouts are voluntary, in accordance with MHSAA guidelines.

Vicksburg head coach Todd McDaniel said he and his coaches would try to teach the new procedures to his players just like they would a play — through practice and repetition.

“We’re going to constantly talk about it before, during and after practice, and let them know how serious a situation it is. We want them all there, but if they don’t follow these guidelines then we won’t let them participate,” McDaniel said. “It’s been a lot of thought put into this process. The main thing is, when we get our kids we want to drill it into them just like we drill in our systems.”

McDaniel, who is entering his first season as Vicksburg’s head coach, added that he was happy to be back on a path to playing football. He has talked with his players via online chats and phone conversations in the past three months, but other than a brief introductory meeting just before school closed for the year in March he has not had any in-person interaction with them.

“I’m elated. I had an opportunity to get with the kids the week before spring break, and then we closed everything,” he said. “I’m sick and tired of Zoom meetings.”

Warren Central coach Josh Morgan said the shortened offseason will be as much of a challenge as the long checklist of new procedures. A full offseason workout regimen that normally plays out over a six-month period will now be condensed to about six weeks. The work that was done between December and March has essentially been lost by the inactivity since then.

“It’ll be a challenge to put a plan together, but you have to be able to adapt to everything thrown at you,” Morgan said. “In six weeks, you’re trying to find a way to acclimate, build on your conditioning and strength program, get your spring work back, and work out the kinks in your depth chart. You’re basically combining your offseason, spring and summer into one.”

Football is the most high profile sport in the fall, but several others are also formulating their return to play plans.

Tryouts for basketball teams at both high schools that had been scheduled in June have been postponed until school is back in session, Nailor said. He planned to meet with baseball, softball and soccer coaches this week to discuss whether to proceed with summer workouts or not. The MHSAA has prohibited summer games, and being unable to throw or kick balls would limit what those sports could do in practice.

More changes, Nailor added, could come as state and federal guidelines are adjusted and more information about COVID-19 emerges.

“Everything we’re doing is for the safety of students, staff and the faculty as well. This is a long, evolving plan that will be updated as more information becomes available,” Nailor said. “This stuff is changing every minute, it seems like. We want to communicate information, but that may change as soon as we put something out there.”