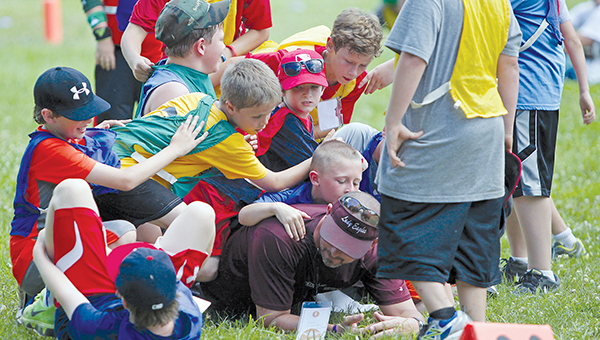 Due to concerns about the COVID-19 virus, officials with Crossway Church have announced a traditional WinShape Camp will not be held this summer. Instead, the church is offering online alternatives. (Justin Sellers/The Vicksburg Post file photo)

Camp WinShape, a faith-based summer program sponsored by Chick-fil-A and held at Crossway Church for the last six years, has been canceled this year out of concern for COVID-19, said Angela Marshall, children’s pastor at Crossway.

She said the camp will be replaced by an online WinShape program, adding the virus has also affected some summer church programs.

“We are kind of in limbo,” she said. She said the church’s youth ministry was scheduled to participate in a faith-based program at a college campus in Texas, “But the campuses are closed and the program has been moved to Arkansas,” and church officials are trying to decide if the students will still go.

“We have a summer musical every year and this year we were going to do ‘Beauty and the Beast,’” Marshall said. “We’re going to push it to next year.

Crossway began hosting WinShape in 2014. This year marks the first time the camp has not been held.

Antonio Del Sesto, host development specialist for WinShape, said the decision to cancel the camps this year “was really just due to the increased government regulations across the country.

“Our heartbeat behind it was wanting to keep campers safe and families safe,” Del Sesto said. “We made the decision to cancel all of our day and overnight camps for the summer.”

Del Sesto said a virtual camp will be offered.

He said the online program called “WinShape Camps ON!,” is a virtual camp program. “We’re calling this an at-home experience for kids to have fun while they continue to grow in their faith. Essentially, we’re bringing a lot of the favorite things about WinShape straight to a person’s living room.”

Del Sesto said the virtual program is a combination of video content “and delivered goodies and different kits that we’ll be able to send out. Campers from all ages, who have finished grades K-12, will be able to partake in this.

“We’re striving to fill it with the same intention that campers have come to expect from the in-person experience over the last few years,” he said.

The virtual program is split into three tiers, each with different fees.

The first, called “OnDemand,” is $19 and provides campers with some live content and prerecorded content. The second tier, called “OnDemand Lite,” is $79 and children receive camper activity kits with instructions on activities they can do. They can also participate in live sessions.

The third tier, “OnDemand Plus,” is $99. It provides kits and allows participants to be involved with a virtual small group led by members of the summer staff.

The first week of camp is June 15-19, with five scheduled weeks ending with the final camp set for July 13-17. Del Sesto said another camp may be held July 20-24 depending on registration.

Sign up for the different programs by going to https://winshapeon.org/tiers/ondemand-plus/. The website contains information on the tiers and registration.

He said program officials are hoping to return to in-person camps in 2021.

WinShape was established in 1985 by Chick-fil-A founder S. Truett Cathy as a way to challenge young people physically and spiritually. In 2008, the program was expanded to include weeklong day and overnight camps serving communities across the U.S.

According to its website, WinShape Camps’ mission is to glorify God by creating experiences that transform campers and families with the message of Jesus Christ.