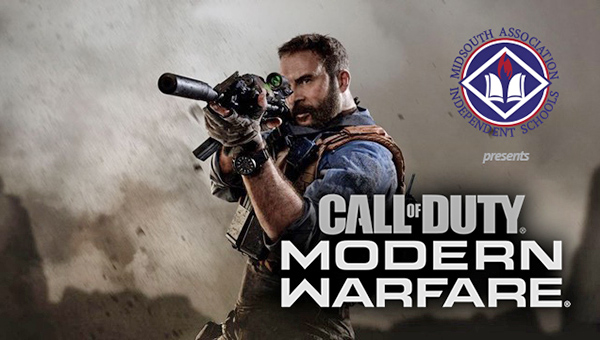 The Mid-South Association of Independent Schools will host an e-sports tournament featuring the video game “Call of Duty: Modern Warfare” beginning on June 10. (Courtesy of the MAIS)

The Mid-South Association of Independent Schools is putting out the Call for its latest e-sports offering.

The MAIS will host a tournament featuring the game “Call of Duty: Modern Warfare,” beginning June 10. The tournament follows two previous e-sports tournaments with the game “Fortnite” in April, and was a popular request among students, MAIS associate director of activities Chris Chance said.

“When we did Fortnite, we asked for feedback and Call of Duty was the one that overwhelmingly the kids wanted,” Chance said.

Unlike the previous single-player tournaments, the Call of Duty tournament will feature teams of two players each in the game’s “standard gunfight” mode. Participation is limited to 250 two-person teams, and competition will be in the evenings. Brackets will be released after registration concludes on June 8.

The two Fortnite tournaments could only accommodate 180 people. As many as 500 could participate in the Call of Duty tournament.

“We had a lot of people that wanted in on Fortnite and we couldn’t accommodate them. We’re able to do more with Call of Duty with the setup of the game, and the time of year it is,” Chance said. “With Fortnite, we were doing it in the evenings and we still had classes going on online. Now that school is out, there is a little more time for everyone.”

The registration fee is $20 per team, or $10 per player. All players must be students at MAIS member schools, but students from two different schools can be on the same team.
Players must also be in grades 9-12, or at least 13 years old as of June 10, 2020, and a parental consent form is required. Cross-platform play on PC, XBox and Playstation 4 will be supported.

All of the registration information is available at the MAIS web site — msais.org — under the “Bulletin Board” tab.

The game rules will be modified to PG settings. Gore and blood must be disabled, and in-game voice effects must be turned off in the audio settings to eliminate curse words. Players’ Activision gamer tags and team names must also be family friendly.

“I had no idea how many of those names were not appropriate,” Chance said with a chuckle.

The winning team will receive a $250 cash scholarship. There are also tentative plans to send the winners into a larger tournament against teams from other states, but Chance said those were still early in the planning stages.

“We’re still trying to do that,” he said. “The other states involved are waiting to see how we do with it.”