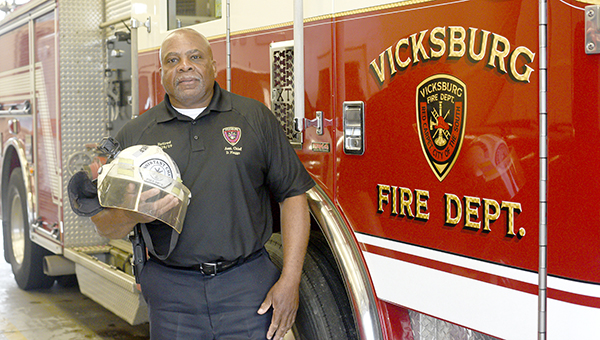 Vicksburg Fire Department Assistant Chief Darrell Flaggs poses for a photo in front of Engine 6 at Vicksburg Central Fire Station in June 2019. Flaggs, who retired from the department after 33 years, died Friday after a battle with cancer. (Courtland Wells/The Vicksburg Post)

On a day last June, Darrell Flaggs, an assistant fire chief with the Vicksburg Fire Department, finished his shift at the department’s Central Fire Station and retired. It was the last day of a distinguished 33-year career with the department that began in January 1986.

But just a year after his retirement, after his tremendous service to the city of Vicksburg had ended, Flaggs faced another test, cancer. Friday, that fight came to end as Flaggs died at his home.

When he retired, Flaggs said he planned to spend more time with his grandchildren, his church family and gardening. He also said he would be “curious” whenever he heard the sirens of firetrucks as they headed to another call.

“It’s a good feeling knowing you’ve served your community or you’ve served somebody who was in need; that you went to a chaotic situation and brought some calm,” he said looking back on his career. “It’s the best thing I’ve ever done.”

Prior to joining the Vicksburg Fire Department, Flaggs served two years of active duty in the Army Reserve as an administrative assistant at the 412th Theater Engineer Command before attending Jackson State University, where he majored in business management.

Flaggs began his career at the Central Fire Station but spent most of his time at Stations 6 and 8. Station 8, which was initially on Halls Ferry Road has since been demolished. Station 6 was closed after the construction of Independence 3 on Berryman Road.

“I enjoyed working with him, and we went to many emergency scenes together,” Vicksburg Fire Department Chief Craig Danczyk said Friday. “I especially enjoyed our collaboration from 2015-2019 when he was serving as an assistant chief.

“He genuinely served this community with all his heart, and it was a pleasure to work with him. He will be missed by many and my thoughts and prayers extend to the Flaggs family during this most difficult time.”

In addition to his service with the Vicksburg Fire Department, Flaggs was also a bus driver for the Vicksburg-Warren School District.

“I’ve been driving a school bus for the last nine years,” he said at the time of his retirement from the fire department. “The Vicksburg Warren School District is a great school district. I enjoy the children, and it gives me another opportunity to learn again.

“The Vicksburg Warren School District travels millions of miles every year, and the kids go on all types of field trips. They attend all types of museums, whether they’re in Louisiana, Mississippi or Alabama,” he said. “I get a chance to visit all those different museums and activities. It’s kind of like learning again.”

Lakeview Memorial Funeral Home is charged with the arrangements, which will be announced later.