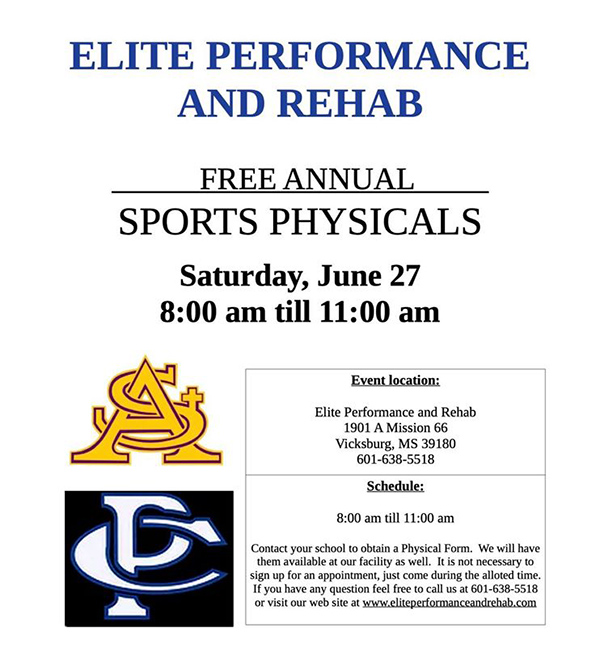 High school athletes at St. Aloysius and Porter’s Chapel Academy will have a chance to get an updated physical later this month.

The two schools have partnered with Elite Performance and Rehab to offer free athletic physicals to all of their athletes for the 2020-21 school year. The physicals will be given Saturday, June 27, from 8 to 11 a.m.

No appointment is necessary, although athletes must have a physical form that is available either from their school or from Elite. Elite Performance and Rehab is located at 1901 A Mission 66.

Athletic physicals typically are good for one year from the date they are given, but the validity of those given in 2019 were extended for an additional year by both the Mississippi High School Activities Association and Mid-South Association of Independent Schools because of the COVID-19 pandemic.

Even so, PCA athletic director and head football coach Blake Purvis said he was glad to have the opportunity to freshen up the physicals for his school’s athletes. The physicals generally screen for pre-existing conditions that could cause major health issues during periods of exertion.

“I would rather have an updated one, so in case something happened in the last year we know about it,” Purvis said. “I’m glad we are able to do it. The guys at Elite, I fully trust them to do what is necessary to keep everybody safe with the COVID stuff. I appreciate that they are still doing it.”

Vicksburg Warren School District athletic director Preston Nailor said Thursday that plans are in the works to partner with several local doctors to provide updated physicals for athletes at Vicksburg and Warren Central high schools. Nailor said he hopes to have all of the details finalized in the coming days.

In recent years, athletes at Warren County’s high schools have received physicals in mass sessions at River Region Merit Health. That process was disrupted, however, by the COVID-19 pandemic and created uncertainty about athletes receiving new physicals.