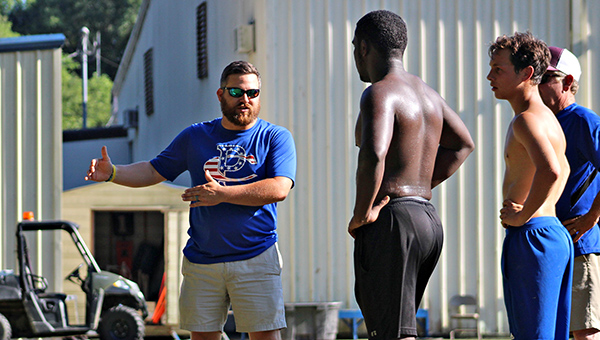 Like they often do, Warren County’s high school football coaches have spent this offseason breaking down their operation and trying to figure out how to handle every possible scenario that might occur on the field.

The situations they’re pondering are not limited, however, to the two-minute drill or how to stop an opponent on the goal line. It’s how to make sure players bring their own water to practice, make sure they don’t cluster together during breaks, and what to do if someone shows up with a fever.

Coaches at Warren Central, Vicksburg High, Porter’s Chapel Academy and St. Aloysius will be on the front line of the next phase of the fight against COVID-19. As football teams return to practice this month, they will be the test subjects in a social and medical experiment that could determine whether the rest of their classmates can safely return later this summer.

“We’re going to do everything we can to make sure our players and coaches are taken care of. We’ll try to be organized, and we feel good about the plan we’ve got in place,” Warren Central head coach Josh Morgan said. “We’re all looking for some kind of guidance on how it’s going to look, and we’re the first ones. You shut down school for three months, and now you go back and you’re responsible for setting up the plan. You want to make sure you do it right.”

The Vicksburg Warren School District approved a return-to-play plan at its board meeting on May 28. Coaches from all sports were required to submit their own specific plans, which included how to handle everything from the arrival of players to disinfecting fieldhouses and equipment after practice is done for the day.

Football teams at Vicksburg and Warren Central will begin summer workouts at 8 a.m. on June 15. Porter’s Chapel started last week, and St. Aloysius will begin Monday morning at 7 a.m. Hard work begins long before players get on the field, however.

“We’re going to have our kids report at 7:30. We’ll have two entry points, and do temperature checks,” Vicksburg head coach Todd McDaniel said. “The day before, we’ll sanitize the buildings even though we don’t plan on using the buildings much.”

Screening anywhere from 30 to 100 players for COVID-19 symptoms upon arrival is just one of the additional duties coaches will take on this summer. They will become janitors and doctors, administrators and police as they monitor and enforce the restrictions that will allow them to play football once in a while.

Under the return to play guidelines from the school district, Mississippi High School Activities Association and Mid-South Association of Independent Schools, coaches must screen athletes for symptoms and keep detailed records of the daily results. Anyone showing symptoms is supposed to be sent home and quarantined for 14 days.

During practice, players will be separated into groups of between 10 and 20. They will work in the same groups and with the same coaches every day — most likely based on the positions they play — to minimize exposure. The groups will be scattered, with some working on either end of the main football field and others banished to adjacent practice, baseball and softball fields.

Locker rooms cannot be used, so players must dress and shower at home. Practices are limited to a strict two-hour time limit for the first two weeks as players get acclimated to the summer heat and back into shape.

Afterward, all facilities and equipment must be thoroughly disinfected.
Morgan noted that coaches often do a lot of that behind-the-scenes work already, and shrugged off the increased responsibilities as more of the same.

“Coaches are so much more than coaches already. Our duties are whatever it takes. We wear many hats. Coaching is often very little of what you spend your time doing,” Morgan said. “It’ll be a challenge to put a plan together, but you have to be able to adapt to everything that gets thrown at you.”

One of the key restrictions is on water. Shared coolers and reusable water bottles are prohibited, so players will be required to find alternate means of hydration.

McDaniel said he’ll have his players bring one-gallon jugs to drink out of. St. Aloysius coach Stacy Sizemore said parents have donated bottled water, but is still encouraging them to bring their own.

PCA coach Blake Purvis said there might be some benefits to the changes in water breaks.

“We can’t have a community cooler, so everybody has to have individual bottles or their own water source. In some ways it’s a little more efficient because everybody gets their own and doesn’t have to wait their turn for a bottle or a hose,” Purvis said.

The more difficult adaptation might be the vigilance required to comply with every item on a brand new 30-point daily checklist, while still managing to get some work done on the field. McDaniel, who is entering his first season at Vicksburg, said preparation and repetition among his assistant coaches and players can help.

Getting everyone to know and understand the rules, he said, will soon make them just part of the daily routine. Workouts are voluntary, but those who can’t comply with the new rules will not be welcomed back.

“We’re going to constantly talk about it before, during and after practice, and let them know how serious the situation is. We want them all there, but if they don’t follow these guidelines we won’t let them participate,” McDaniel said. “It’s been a lot of thought put into this process. The main thing is, when we get our kids and drill it into them just like we drill in our systems.”

Warren Central and Vicksburg have bigger rosters to deal with, but also bigger coaching staffs to divide up the new tasks. At Porter’s Chapel and St. Al, that is not a luxury.

PCA and St. Al typically only have one or two assistant coaches — some of them part-time or volunteers — for football, and each one has a fieldhouse to take care of and the same duties as their counterparts at larger schools. That challenge is being solved with some cooperation and creative solutions.

Purvis said he’s enlisted other coaches at the school to help out, which has increased the available staff. Seven coaches were assisting with the team’s strength and conditioning workout on Thursday.

“All of our coaches are working together so we can split them up. I’ve got myself and five other guys working with our football team,” Purvis said. “In years past it would have been a challenge. Some of it was based on (COVID-19), but some of it was dictated on the last couple of years where we were limited and needed more help.”

At St. Al, Sizemore will have a staff of four to handle about 30 players. Each coach will work with a group of 7 to 10 players each day.

“It’s interesting times,” Sizemore said. “All we can ask is for everyone to have some flexibility so we can get through this.”
•

Playing sports in the era of COVID-19, no matter where, is a work in progress. Techniques and responsibilities will evolve along with governmental guidelines. Things that seem necessary in June might not be antiquated by August.

Some of the required steps will be difficult to enforce in practice. Baseball and softball, for example, are not allowed to use balls at the moment, although throwing them is a necessary part of training. Maintaining social distance in football — a contact sport with large rosters — might be impossible.

“Every little bitty thing has to be well thought-out,” Morgan said. “What we’ve tried to do as a staff was be as proactive as we can. We tried to find something that could go wrong in every situation and stay ahead of every scenario. That’s challenging, but all we can do is the best we can do.”

Vicksburg Warren School District athletic director Preston Nailor said there has been plenty of discussion in the coaching profession about how to pull it off. Part of his solution was to postpone the start of offseason workouts for baseball, softball and soccer until at least July.

Football can only do conditioning work such as running and light weightlifting for two weeks. With a June 15 start, that means July 1 is the first time Vicksburg and Warren Central’s teams can touch a football. That will help buy some time for state restrictions to loosen a bit more, as well as for coaches and athletic directors around the state to see what is working and what isn’t.

“That’s been a big question for a lot of people,” Nailor said. “It’s up in the air for me right now, because I want to cut down on contamination of objects. We want to do it in a way that’s sanitary for everybody. It’s a point of emphasis for everyone, and the more ADs and coaches can converse, the better it’s going to be for everyone.”

For now, coaches in Warren County said they’re trying to do their best to check every item off the list each day.

“It’s definitely a lot,” McDaniel said. “Myself and my AD have been discussing this for quite some time, hoping we can get back on the field and playing. We’re just trying to do our best to make sure everybody is safe.”