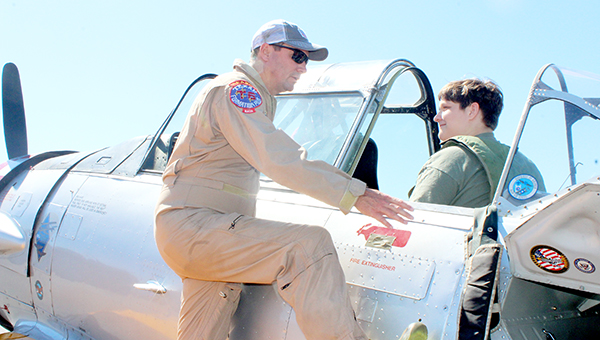 MOUND, La. — Ethan Channell and Sherry Welch, along with her son Talon, took their weekend to a much higher level.

The three were among several visitors to the Southern Heritage Air Museum at the Vicksburg-Tallulah Regional Airport Saturday to take to the air in one of the museum’s vintage aircraft during the museum’s reopening.

The museum had been closed for three months because of Louisiana’s regulations regarding the COVID-19 virus.

More than 300 visitors passed through the museum to look at the displays, shop at the rummage sale, look at the museum’s aircraft parked on the tarmac, experience flight in a vintage aircraft and eat fried catfish.

“We had to wait until Louisiana said we could reopen,” said Patty Mekus, Southern Heritage Air Foundation president. “We fall under the ‘open safely program’ they started for businesses and museums and we’re in phase II. We picked a day when we could reopen with a bang.”

She said the foundation included the rummage sale, which was postponed in April, along with catfish plates, free tours and the plane rides.

“I’m grateful we’re having it in June because we were able to collect a lot more items for the rummage sale,” she said. “This was a way to remind people we’re here, put the planes in the air and remind people about the airshow we are really hoping to have in October.”

Channell, 14, of Vicksburg, took to the air in the museum’s AT-6, which was used to train bomber and fighter pilots in World War II. It was his second trip in a warbird. He flew the B-17G “Nine O Nine” when it visited the museum in 2015.

“It was a fun experience, getting to see from the top down, I guess, over everything, the farms, the wetlands,” Channell said of his AT-6 flight. “The pilot did a four-point roll, some loops; it was amazing.”

He said the four-point roll was interesting “because you didn’t expect it; it takes you by surprise. It looks like the pilot is going to roll, but then he gets to one point and then stops.”

Ethan said the flight encouraged him to get into the sky again.

“It’s the feeling you get when you’re flying; it’s amazing, doing all those turns and things,” he said. “And the view is better than on the ground because you can see everything.”

Their flight in the museum’s WACO bi-plane was the first time Sherry and Talon Welch broke the earth’s gravity.

The flight had special meaning for Talon.

“This is his birthday present from his grandmother,” Sherry said. “He turns 11 on June 25. We thought it would be a cool thing and something he would never forget.”

She said the flight “was good; a lot of fun and a beautiful day to do it.”

Sherry said their pilot took them up and eased them over the Mississippi River.

“He got real low on the river and took us back up,” she said. “He did some rolls over the field, did a few barrel rolls and loops. Our pilot was a crop duster and he likes to fly real low and get back up high.”

“I was scared for a little bit but it was fun,” Talon said.

“He’s kind of a thrill-seeker,” his mother added.

The visit to the museum was the first for Sherry and Talon.

Her mother, Sheila McFadden, also flew in the Waco.

“I’ve flown on commercial flights, but the WACO was awesome,” she said, adding she has been to the museum before.

“It takes you back to a different time,” Sherry said.

“A much nicer time; a simpler time,” Sheila said.