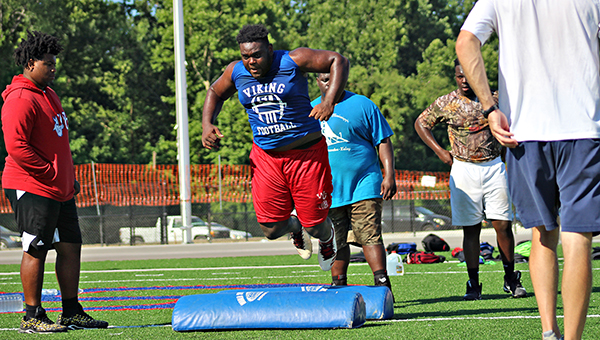 On the sun-soaked turf of Viking Stadium, a new addition cast the only shade.

The massive video scoreboard, installed this week to replace the modest digital model that was in use for years, stood in the far end zone and offered a bit of relief to football players exercising in its shadow. It is the latest piece of a multi-year renovation to the 50-year-old stadium, but hardly the only thing that seems different these days.

The Vikings began summer workouts last Monday, about two weeks later than normal and after a three-month layoff because of the COVID-19 pandemic. The roster is undergoing its typical annual overhaul to replace departed seniors. The 2020 season begins in two months and the Vikings — just like every other team in Mississippi — are adjusting to new timelines and a rushed schedule as they get ready.

“It’s a summer school type of atmosphere for football. We’re trying to truly get in several different phases,” Warren Central head coach Josh Morgan said. “We have a plan that we feel very good about, but they truly are in tiers. It’s conditioning. Then there will be a developmental period, and a ready to play period. That’s drawn out, usually, over six months. We’re really fortunate to have a coaching staff that’s been together. That’s helped in all of this. It’s really just another bump in the road. We’ll do what we do and find a way.” 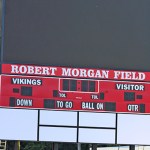 The first phase of the plan is getting players acclimated to the summer heat and back into shape. The spring practice period was canceled and the Vikings have not had any organized workouts since the first week of March.

Agility drills were on the agenda on this day, with players leaping over pads and stepping through rope ladders in addition to other light and basic exercises.

“We’re reconditioning them. They’ve been out for three months. We have to get them back to where they can do what’s expected of them. So we’re trying to build them up, and build that endurance for what they’re going to go through in the rhythms of the season,” Morgan said. “You’ve got to be in shape to play, but we’re also trying to prevent injuries so we want them in the best shape we can get them in, in the shortest amount of time.”

Morgan said he was encouraged by the enthusiasm shown by players and coaches in the first week back. Everyone, it seems, was ready to end their coronavirus-induced hibernation and get back to work.

“We opened the gates up and were really not sure what to expect. They just started piling in, ready to go, and it was a great sight. It was good medicine,” Morgan said.

The Vikings’ first game action will be Aug. 14, when they play a jamboree at Madison-Ridgeland Academy. The regular season starts a week later, against Holmes County Central in the Red Carpet Bowl.

The season opener will also mark the big reveal of a revamped Viking Stadium.

A new brick ticket booth has been built at the entrance, and the huge video board will be a showpiece. New lights will be installed — the stadium currently has none — and the fieldhouse is being renovated.

Last week, workers were busy replacing parts of the metal bleachers that have served as seats for generations of Warren Central fans.

Morgan practically grew up in Viking Stadium. He played for Warren Central, and his father Robert was the head coach for nearly 20 years. He said he was happy to see the aging stadium get a needed facelift, and that the traditions spawned in its previous incarnation will remain.

“Transforming what we’ve had is really awesome. To be able to give our kids and our community this, it’s something to marvel at. We’re awfully proud of it, and awfully appreciative of it. Just watching it come together, it’s a great investment and I think it’s going to pay great dividends down the road,” Morgan said. “Progress is progress. Our traditions won’t go anywhere. To watch it come from the ground up, along with other people who know and have seen what’s been here for 50 years, it’s a really unique situation to watch unfold and it’s something we’re really proud of.”

For the next two months, Morgan and his players and coaching staff will work side by side with construction workers to enter a new season. Just getting to do that, he added, was enough to bring a smile to all of their faces.

“Great attitudes and enthusiasm, and that’s what it’s all about,” he said. “Those are two very important things. We’re not ready to play a football game, and there’s going to be growing pains. But the quicker we can get on it and get them here, we can start that process.”