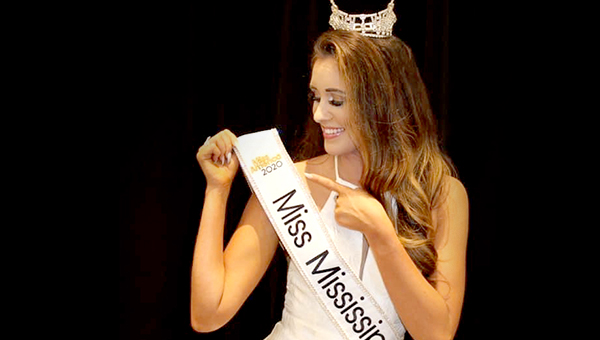 Miss Mississippi Mary Margaret Hyer points to the 2020 on the new sash received Saturday during a ceremony and dinner in her honor. Hyer, who was crowned the 2019 Miss Mississippi in June 2019, agreed to serve a second year as Miss Mississippi after this year's competition was canceled due to the COVID-19 pandemic. (Submitted Photo)

Hyer looks ahead to a second year as Miss Mississippi

She should have put a crown on the winning contestant’s head and, following an evening of festivities, packed up her gear from the week-long event and headed home for the next phase of her career — law school.

Instead, a ceremony was held at the Vicksburg Convention Center in the Hattiesburg native’s honor to mark the start of an unprecedented second year in the job. It is the first time in the pageant’s 87-year history that the same woman has been Miss Mississippi for two consecutive years.

“We wanted to do something to honor Mary Margaret for coming back to do another year of service,” Miss Mississippi Chairman of the Board David Blackledge said.

The Miss Mississippi Competition was canceled this year due to the COVID-19 pandemic. After being asked by the board if she would continue on as Miss Mississippi, Hyer agreed.

During the ceremony, Blackledge said, Hyer received appreciation and recognition from the board for services she had already rendered as Miss Mississippi as well as being thanked for agreeing to serve for a second year. Vicksburg Mayor George Flaggs Jr. then presented the 2020 Miss Mississippi sash to Hyer.

“It’s nice now because I get two of the crystal sashes,” Hyer said.

In recalling the night she was crowned Miss Mississippi, Hyer said there were some moments of blurred memory because of all the excitement, but she remembered clearly 2018 Miss Mississippi Asya Branch pinning on her sash.

“I do remember Asya putting that sash on me for the first time and saying, ‘It has crystals on it,’” Hyer said.

Hyer was crowned Miss Mississippi on June 22, 2019, at the Vicksburg Convention Center. Since then, she has traveled thousands of miles across the state promoting her platform “Advocate, Celebrate, Donate: Decreasing the Donor Organ Deficit” until the outbreak of the pandemic brought everything to a stop.

“Before then I was making anywhere from five to nine appearances a week and was traveling the roads so often I was getting a new car from George Carr here in Vicksburg about once a month,” Hyer said. The dealership provides Miss Mississippi with a new car every 6,000 miles.

Now, Hyer’s appearances are done virtually or through social media.

“We’ve had to get creative and since mid-March. I have had dozens of appearances virtually and social media has been a big part of my job now since I can’t really interact with the public,” she said.

To help promote her platform, Hyer said she did a big social media push.

“April was supposed to be my busiest month because April is ‘Donate Life Month’ and there were a number of events I was booked for, so with them, we did them virtually,” she said. “Also, I recently went to Jackson to film footage and voice-overs for the Sparrow Award, which recognizes exceptional work in community hospital partners of the Mississippi Organ and Recovery Agency.”

Hyer said one of the highlights in serving as Miss Mississippi are the visits to the Blair E. Batson Children’s Hospital in Jackson. Her last physical visit was in February.

“The majority of what I do for them (the children at Blair E. Batson) are those monthly visits and it is such a bright spot in my month, and it’s sad I haven’t gotten to go since Valentine’s Day,” she said. “So I’m looking forward to the day I return and know it will certainly be a happy return for me.”

Staying on as Miss Mississippi allows for a “little bit of a do-over,” Hyer said, in her second year, since about a quarter of her first year was “shut down.”

“I hope things get back to normal relatively soon, of course with new regulations, so that I can continue to serve our state the way that I should,” she said.

Hyer said the decision to delay attending law school at Ole Miss was tough, but when the time came to decide, she felt confident in her choice.

“I really do feel that the Lord was telling me to go ahead and start thinking about what it would look like if I was asked to stay an extra year and when (Blackledge) called me in April, I already had a couple of months to mull that over and was more than ready to say yes,” Hyer said.

Agreeing to a second year as Miss Mississippi also helped Hyer with paying for law school.

“She made a commitment to us, so we made a commitment to her. As a result, our board voted to give her an additional $5,000 cash scholarship to serve for this coming year,” Blackledge said. “We wanted to do that for her because she has done such a great job representing us and we are thankful and grateful she was willing to commit to us and serve as Miss Mississippi until June 26, 2021.”