Search and rescue effort on Eagle Lake turns into… 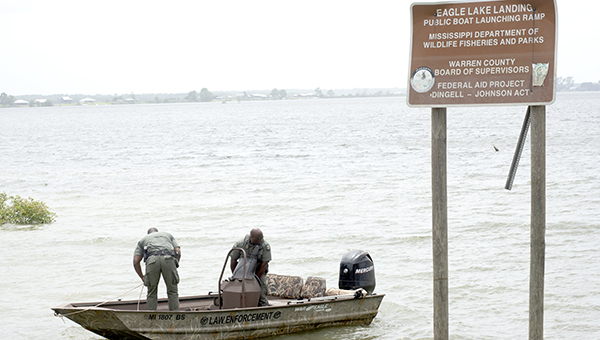 A boat crew with the Mississippi Department of Wildlife, Fisheries and Parks set out on Eagle Lake Tuesday as part of a search for a couple who have not been seen since Monday afternoon. The body of a man was found Tuesday afternoon. The woman, reported to be in her 60s, has yet to be found. (Courtland Wells/The Vicksburg Post)

The search for the body of a woman believed lost on Eagle Lake has entered its second day.

Warren County Sheriff Martin Pace said boat crews with his office remained on the lake throughout the night on Tuesday looking for the second of two people who are believed to have fallen into the lake.

Sadly, what was a search and rescue effort turned into a retrieval effort after the body of a man, in his 50s, was discovered Tuesday afternoon.

The name of the man found, and the woman still missing, have not been released.

Pace said authorities were notified Tuesday morning of a couple that reportedly went out on the lake on a pontoon boat Monday afternoon and had not returned. He said the pontoon boat was located on the Australia Island side of Eagle Lake with no apparent damage.

Throughout the day Tuesday, boats from the Eagle Lake Volunteer Fire Department, the Warren County Sheriff’s Office, the Vicksburg Fire Department and the Mississippi Department of Wildlife, Fisheries and Parks scoured the lake for any sign of the missing couple.

On Australia Island, teams with the Warren County Sheriff’s Office searched by foot and utility terrain vehicles, but nothing was found. Volunteers from the Eagle Lake community also helped in the search, both on land and on the water. Pace also said search teams from Hinds, Madison and Rankin counties have assisted in the search.

Pace said Wednesday that it appeared that while the boat was found against the shoreline of Australia Island, there was no evidence that anyone ever got off the boat on the island.

The body of the man was located several hundred yards from the boat, Pace said, in an area between Maxwell’s Landing and Buck Chute.

Pace declined to provide any information on the identity of the individuals but did say the couple owned a weekend home on Eagle Lake.

“We are going to do all we can to provide closure to this family,” Pace said Tuesday evening as he and other teams went back out on the lake. “It’s a tragic situation. It appears that a fun afternoon on the lake has turned into something so terrible.”