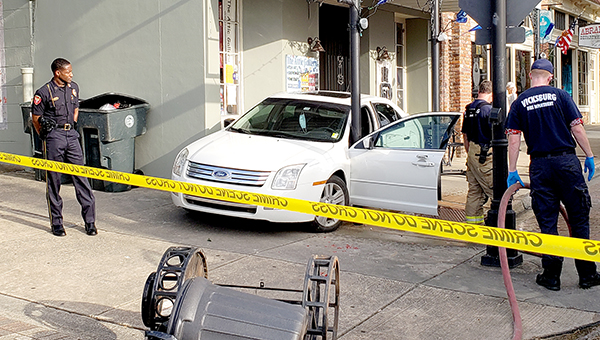 Vicksburg Police Chief Milton Moore, left, looks over the scene of a one-vehicle accident at the intersection of Washington Street and Grove Street Wednesday that claimed the life of Jeffery Lloyd. (John Surratt/The Vicksburg Post)

When Cherry Dabney-Robbins remembers Jeffery Lloyd, she remembers her friendship with a man who was a great friend and her first date.

Lloyd, who had been living in Auburn, Ala., died Wednesday afternoon from injuries received in a one-car wreck on Washington Street as he attempted to prevent his car from rolling down Grove Street. He was in town visiting family.

“I have known Jeff Lloyd since I was in seventh grade at Warren Central,” Robbins said. “He was a year older than me and he was actually the first date I ever had. I asked him out to a girls club dance. He and I were really good friends. We got along really, really well. He was so funny, he was always in a great mood.”

Robbins described Lloyd as “just a great individual. Everybody in the mid-’80s who went to school at Warren Central knew who Jeff Lloyd was. He was just that gregarious, fun-loving friendly, outgoing guy. He had lots of friends; a lot of people loved him very much. We stayed friends all through high school and we went to college together for a few years. We were still close friends during our college years.”

When they were in college, Robbins said, she and Lloyd “just hung out a lot and he was always available to talk; to work things out if we were having problems with anything. We just had a really good relationship as friends.”

Lloyd, Robbins said, later moved away and they lost touch over the years but reconnected through social media.

“He called me and we would keep up with one another,” she said. “Last year I was getting ready to help my daughter furnish an apartment for college and I went to see Rob, his brother, at Hotel Furniture Warehouse and lo and behold, there was Jeff; I did not know he was back in town. We had a great time catching up.

“He was just a super individual and would do anything for you.”

Daniel Boone, owner of Highway 61 Coffee Shop on Washington Street, said he had returned with groceries for his business and was inside with his wife when they heard a loud noise.

“We went to the front of the building and saw a man lying on the ground with a head injury and called 911,” he said.

According to police reports, witnesses said Lloyd’s car was parked on Grove Street and began rolling down the street. Lloyd attempted to stop the car, which veered right and rolled onto the sidewalk in front of the coffee shop, pinning him between the car and a metal pole in front of the building.

He was pronounced dead at the scene by Warren County Coroner Doug Huskey.