Any future restrictions will be because of us and… 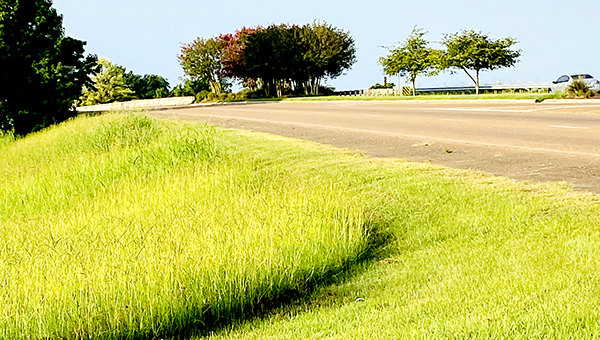 The area around the Interstate 20 overpass on Halls Ferry Road shows a clear line Thursday morning of where the city-maintained area ends and the state-maintained area begins. City crews and contractors cannot cut or maintain any median or rights of way maintained by the state.

It is becoming evident that the city of Vicksburg may very well take matters into their own hands once again.

It is once again clear the system by which the Mississippi Department of Transportation, and the state of Mississippi as a whole, treats the appearance and condition of its state rights of way is flawed, if not a failure.

Last year, the city of Vicksburg spent some of its taxpayer funds to pay for the cutting and clearing of medians and rights of way along state highways and the interstate after those areas became grossly overgrown. That was thousands of dollars in money the city should not have felt the need to pay, but what else could they do?

South Ward Alderman Alex Monsour, a former legislator, said he and other city leaders shared with state transportation leaders their concerns before the legislative session began this year.

While it is not clear yet whether those shared concerns made a difference, early evidence indicates that the failures of 2019 are once again showing up in 2020.

Just recently, Monsour again appeared in an area that should be maintained by the state — or a state contractor — using a weed eater to knock down the overgrown grass. We can think of far better uses for an elected official’s time and salary than having them maintaining a state right of way.

We understand there are a lot of miles of medians and rights of way the state and its contractors are responsible to cut, but what we are asking is not impossible. What we are asking to be done is to maintain what is yours or give the responsibility to someone else.

The city of Vicksburg invests heavily in beautifying areas that are points of entry into the city. The flower beds are well maintained and grass along those areas is cut often. It has to be. We are a destination city, a city that depends on tourism and visitor experiences.

We would hope and expect the state of Mississippi would understand the area around Vicksburg — particularly the areas along Interstate 20 — are an entryway into the state and the first impression millions of visitors have of Mississippi. It should be treated as such.

Mississippi is in the midst of perfect grass growing weather. It is warm, with a chance of rain just about every day. But while we don’t expect the state or its contractors to keep the grass cut like a golf course fairway, we certainly should expect better than what we get.