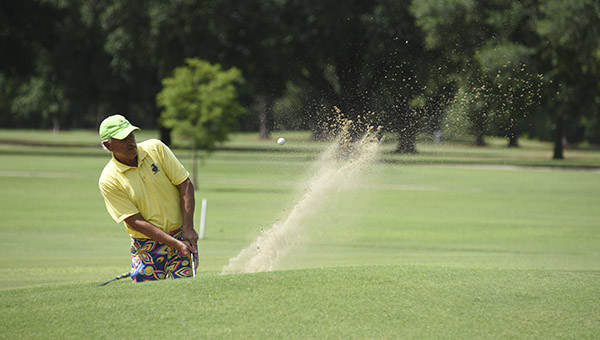 Jim Darnell hits the ball out of a sand trap during the Warren County Championship at Clear Creek Golf Course on Saturday. Darnell shot a 76 and is in third place in the Senior Championship heading into Sunday’s final round. (Courtland Wells/The Vicksburg Post)

Low scores were easy to come by in the first round of the Warren County Championship, setting up what should be a wild finish Sunday at Clear Creek Golf Course.

Sixteen golfers broke 80 in the first round on Saturday, and all were within eight shots of the lead. 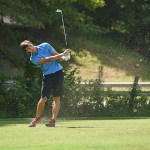 Joel Greer and Seth Foshee sat atop the leaderboard after each golfer carded a 71. Pierson Waring was two shots back, while Zach Shiers and two-time defending champion Jeff Harpole were another shot back at 74.

Caleb Davis and Wilson Palmertree both shot 75 to tie for eighth place. Herbie Poole, Austin Neihaus and Matt Hossley rounded out the championship flight at 76.

Cory Teague led the first flight after shooting a 77, and eight other golfers were at 80 or lower.

The final round begins early Sunday at Clear Creek, with the first seniors teeing off at 7:30 a.m. The main tournament will begin at 8:15 a.m., and the leaders will tee off at 10:45.