Vicksburg officer, concerned citizens team up to save a… 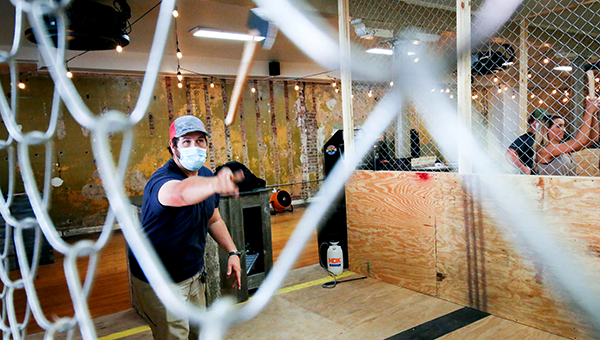 Cade Walters, a coach at The Chopping Block, throws an ax during the businesses first open day to the public. (Walter Frazier/The Vicksburg Post)

As of Saturday, there is a new game in town — ax throwing.

The Chopping Block, located at 1504 Washington Street, has officially opened its doors to the public.

“I am super excited,” Cade Walters said, about the opening.

Walters is one of the coaches at The Chopping Block and is ready to assist those who have never thrown an ax before.

However, before he goes into detail about throwing techniques, Walters gives players a rundown of safety measures.

The Chopping Block, owned by Kevin Roberts, who is also the owner of and Fit Chef, said he came up with the idea of opening an ax-throwing venue in Vicksburg from his business partner who owns one in Philadelphia. Roberts also thought it would offer an entertainment option for people.

“It makes for a great date night,” Roberts said. “You can have fun playing and it’s competitive.”

Roberts said ax-throwing is also a great way to let off a little steam.

“If you have had a hard week, come throw some axes and get out your frustration,” he said.

Tory Sessums attended the soft opening last weekend and said although she was intimidated at first since she had never thrown an ax, it was fun.

“After a few throws I found myself determined to hit the target and have the ax actually stick,” Sessums said. “Once you actually get the technique down, you really enjoy it.”

Sessums said she also thinks The Chopping Block is a great addition to the community.

“The Chopping Block has a family-friendly environment and it also brings a little versatility to Vicksburg,” she said.

Roberts is in the process of getting his beer permit, he said.

“Once we get our beer permit in September, you can come in, have a beverage and throw some axes,” he said, with Sundays geared towards church groups and families.

For those who may not yet be ready to take on throwing the 1 ½ pound ax, there are foam axes available for children.

The cost is $20 per person for an hour and reservations are encouraged. The Chopping Block is a full-function venue with Fit Chef catering and will be available for parties.

Ax throwing began in the 1940s when loggers and lumberjacks began holding competitions in lumber camps, to see who the best lumberjack was. These competitions became known as logger sports.

Roberts is already registered with the NATF, so when leagues are formed, The Chopping Block can host tournaments.