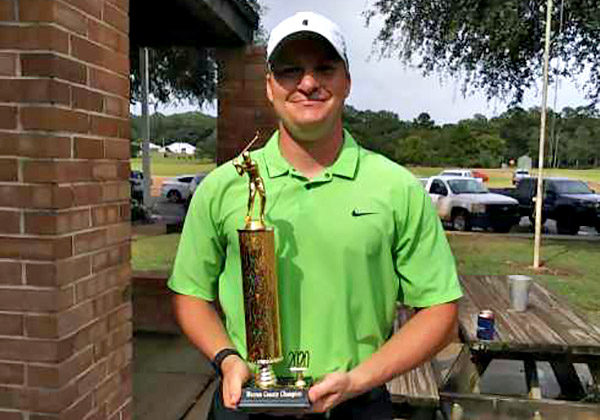 Seth Foshee wasn’t able to replicate his outstanding first round at the Warren County Championship on Sunday, but it didn’t matter. He managed to stay a step ahead while most of his challengers fell back, and escape with the title.

Foshee shot a 75 Sunday at Clear Creek Golf Course to finish with a two-round total of 146. That was good for a one-shot victory over Jeff Harpole and Joel Greer, and his first victory in the Warren County Championship.

Foshee and Greer entered the final round tied for the lead after carding 71s on Saturday, but 16 golfers were within eight shots. Of the 18 golfers who broke 80 on Saturday, however, only seven did so on Sunday and just three bettered their scores.

One of them was Harpole. The two-time defending champion followed up his first-round 74 with a 73 on Sunday to tie Greer for second place. Harpole officially finished second after beating Greer in a four-hole scorecard playoff.

Caleb Davis shot 75 in both rounds and finished fourth with a tournament total of 150. Zach Shiers was fifth, at 151. Rounding out the championship flight were Pierson Waring (154), Wilson Palmertree and Herbie Poole (both at 155), Austin Neihaus (156) and Matt Hossley (162).

Waring was in third place entering the final round, but followed his 73 with an 81 on Sunday.
Mike Hurley was the big mover on the final round leaderboard. After opening with an 80, he shot a 72 on Sunday — the best of the day in the tournament — to finish at 152. He won the first flight by five shots and had the sixth-best score overall.

Bubba Ward shot a 161 to win the second flight, and Mark White a 170 to win the third flight.
In the Senior Championship, Jeff Cowan rallied from a three-shot deficit entering the final round to win. He shot a 76 on Sunday, tied with Rodney Lindsey for the best of the day among the seniors, to finish at 153.

First-round leader Tim Rogers shot a 74 on Saturday, but slipped to an 81 on Sunday and wound up tied with Lindsey for second place. Rogers’ birdie on the 10th hole gave him a scorecard playoff victory over Lindsey.