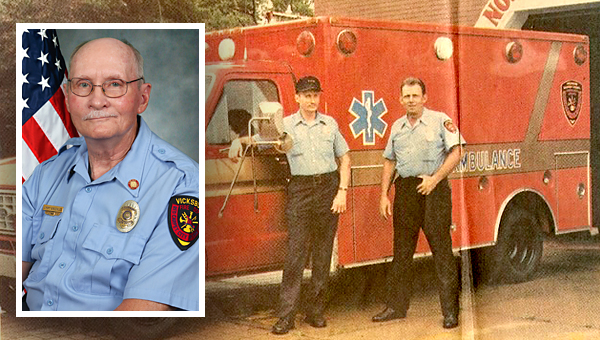 Lt. Jimmy Greenlee may not have started his firefighting career with the city of Vicksburg, but his 29-year career with the Vicksburg Fire Department left a lasting impression on the city and its fire department.

Vicksburg Fire Chief Craig Danczyk said it was an honor to have served with Greenlee.

“I have a lot of wonderful memories working with him. He was a quiet officer and a gentleman,” Danczyk said. “He will be missed.”

Greenlee began career with the Vicksburg Fire Department on May 7, 1984, as a firefighter. He was among the group of new firefighters in 1984 that included former Fire Chief Charles Atkins, who retired in 2017. He was promoted to lieutenant in 2000 and retired Oct. 31, 2013.

He started his firefighting career with the city of Greenville in 1969, before leaving in 1978.

“I was actually his battalion chief when he retired. He was going to be home every day with his wife, and they were excited about that,” Danczyk said. “He was the type of guy who was dependable, always came to work. And when he wasn’t at work, he was doing something with his family. That’s just what he did.”

Greenlee’s daughter, Elizabeth Welch, said the family is hurting in the loss.

“He was a good, Christian man. He will be missed. It’s tough. Nothing can prepare you for it,” Elizabeth said in the loss of her father. “He loved to ride motorcycles and was health-conscious. He went to the gym every day up until three years ago.”

Danczyk said he remembered how much his family meant to Greenlee and the quiet demeanor he had.

“He loved his wife, very much, loved his family. When he was here at the fire department, he was quiet, just got along with everyone,” he added. “If there was something to be done, we need to take care of a task, he would always do his part and more.”