DNA puts an end to months of searching for… 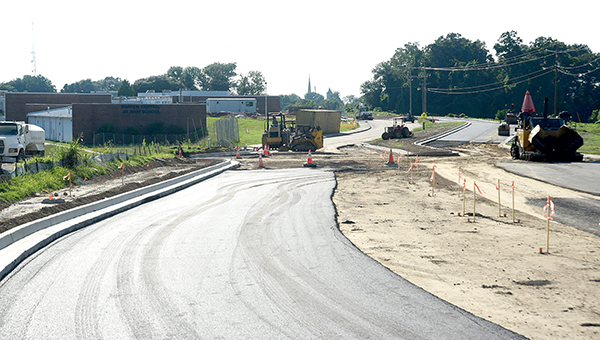 The improvements to Rosa A. Temple Drive, leading to Warren Central Junior High School, Vicksburg Junior High School and the new Academy of Innovation, currently under construction, are expected to be completed by the first day of school on Friday. (Courtland Wells/The Vicksburg Post)

Rosa A. Temple improvements expected to be complete by Friday

Improvements to Rosa A. Temple Drive by the Vicksburg Junior High School, Warren Central Junior High School and the new Academy of Innovation currently under construction are expected to be complete in time for the start of school Friday.

“We had one lane paved this morning (Tuesday) and they’re working on the second lane,” said Gary Bailey, project manager with Dale Bailey Architects of Ridgeland. The company has the contract for designing and overseeing the Vicksburg Warren School District’s $131.5 million facilities renovation and upgrade project involving the district’s school buildings.

Bailey said road contactor Paul Jackson and Sons Construction was making good progress “and hopefully toward the end of the week we’ll have the base asphalt down on the entire road, so it will be fully opened by the end of the week.”

He said the contractor was delayed by a problem with bad soil and weather.

“They were trying to get it ready for the teachers but didn’t get it done,” he said.

While the street will be open, Bailey said, there is still be some work that needs to be done, “But it will be safe and (have) easy access.”

He said the road has been widened to have two lanes going in and two going out with a boulevard between the lanes.

“There are turn lanes at AOI to keep it separate, so it’s going to be dramatically improved circulation to all three of those schools,” Bailey said. He said the street has four lanes past Warren Central Junior High School and narrows back to two lanes with a turn lane at Vicksburg Junior High School.

“As the traffic reduces it reduces the lanes,” he said, adding there will be an access lane to allow southbound traffic on Mission 66 to access Rosa A. Temple.

Warren County voters in 2018 approved an $83 million bond referendum to help finance the $131.5 million facilities plan for repairs, renovation and expansions at each of the district’s 13 schools and the construction of one new building.

The bond issue, the first for the school district in more than 50 years, passed with 68.6 percent of the vote. It is being repaid through a 7.9 mill property tax increase.