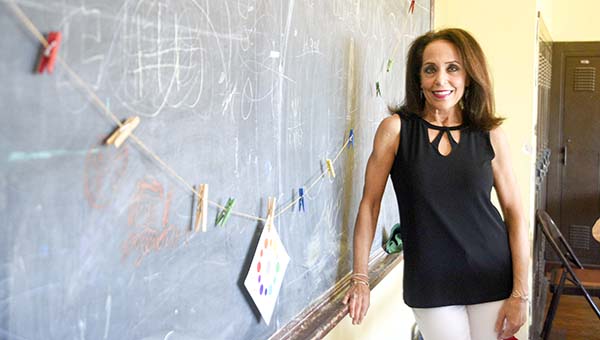 “I couldn’t wait to tell people I worked at St. Francis. I don’t think I’ll ever say goodbye.”

After 41 years, Shelley Nosser is retiring from her job as a teacher at St. Francis Xavier and saying “goodbye.”

“I was home from college for spring break and applied for a teaching job at St. Francis. I didn’t go anywhere else. Sister Rosamond interviewed me and I ended up getting that job before I finished my senior year of college,” Nosser said. “What’s so funny is it was the fourth grade at St. Francis, and I am still in fourth grade.”

Shelley graduated from Vicksburg High School and later studied at the University of Southern Mississippi. The presence of prayer at St. Francis, she said, was the reason she was drawn to it and never wanted to leave.

“Number one, you feel the love when you walk in the door. I was in Heaven,” Nosser said. “I think when you can start a day off with God, with prayer, the day can’t get messed up too much.”

Out of the fear of safety for her mother due to COVID-19, Shelley decided to retire a few years earlier than intended.

“I just could not take that risk of bringing something home to her. Your family comes first,” Shelley said. “She’s an angel from Heaven. Anything good in me comes from her and daddy.”

This decision was not made lightly. Shelley reminisced on 41 “beautiful” years of teaching and how she began dreaming of becoming a teacher while playing school as a little girl. Her two older sisters were teachers as well.

Nosser’s impact on students did not stop in the classroom. Years later, as seniors from St. Aloysius made their final walk down the St. Francis hallway, or even as the children of former students approach fourth grade, those who had Ms. Nosser make a point to tell her about the effect she had on their lives when they were 10.

“At the end of the day, when you walked out of Ms. Nosser’s classroom, you left feeling better than when you got there. In my opinion, that’s why she’s been so successful,” Andrews said. “She took the time to listen to and understand each student.”

Other former students hear the news and beg her to stay so their child can have the same experience they did all those years ago. Teaching the children of former students has been one of the most enjoyable parts of her job.

“It’s so meaningful to them to think, ‘Oh my Mama had this lady. Oh she must be old,’” she said.

Nosser began working at St. Francis when the school was located on Cherry Street. Her classroom was next door to the second-grade classroom of Martha Amborn. Twelve years later, the school moved to Grove Street, and the two were assigned to fourth grade. They have been ‘joined at the hip’ ever since.

“She is my sister at heart. When you have a partner that you work with as well as we worked together, the kids are the ones that benefit from that,” Nosser said.

She said she woke up every day, excited to go to work.

“I was just so proud to be there. I couldn’t wait to tell people I worked at St. Francis,” she said.

She laughed as she talked about students’ infatuation with her trademark lipstick. Each day as lunch ended, she applied her lipstick.

“They loved to see the lipstick on the napkin, and when I would put my lipstick on, they knew it was time for recess,” she said.

Years later, she now has a collection of items given to her with lipstick or a pair of lips on them.

Nosser said that since making the decision to leave, it feels like part of her heart is missing. Days that were once filled with lesson plans and grading papers will now be filled with new activities. If she had it to do all over again, she still would go back to that day she interviewed with Rosamond.

“Once you see those beautiful little faces, it just falls into place. Knowing that you’re gonna be their leader, you’re gonna be the one to help them grow,” she said. “When they know you care and love them, the sky is the limit for what they will do. I don’t think I’ll ever say goodbye to that school.”

Anna Kate Doiron is an intern writing for The Vicksburg Post and Vicksburg Living. She is a graduate of St. Aloysius and attends the University of Mississippi.