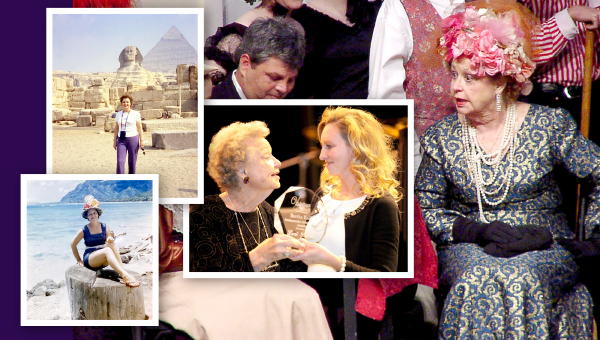 Bertha R. Kolb was a woman who loved life, traveling, soaking up the scenery and trying new things.

“My grandmother was also so gracious with her time and energy. She wanted people to feel a sense of belonging and she did that through parties at her house and gatherings and church and any way she could,” Kolb’s granddaughter Stephanie Fisher said. “I think a lot of people were touched by her in ways that she didn’t even realize.”

With her exuberant energy and enthusiasm, Kolb made her mark in Vicksburg.

For more than 50 years she was an avid volunteer for the Vicksburg-Warren County Chamber of Commerce.

“Bertha was a joy to be around,” Christi Kilroy, former executive director at the Vicksburg-Warren Chamber of Commerce, said. “She was an impeccable ambassador and such a loyal advocate for the work the chamber was doing. She showed up at every event possible and she showed up for whatever it was we needed. She was just very passionate about the work the chamber had done.”

“I remember her talking to people and she would ask them if they were a member of the chamber and if so she would say, ‘I knew I liked you,’” Kilroy said. If they weren’t members, Kilroy said Kolb cajoled them to become members. “She would say, ‘What are you waiting for and why in the world would you not do that, this is all the things we do.’”

“As chamber director, I felt so honored to present one outstanding yearly Chamber Ambassador with the award named after Bertha Kolb,” Jane Flowers, who followed Kilroy as executive director of the chamber, said. “Bertha was always so bubbly and welcoming. She kept an active chamber membership until she could no longer go anywhere. She was truly a great ambassador for Vicksburg.”

In addition to her many years of service to the chamber, Kolb performed in Vicksburg Theatre Guild productions and was a long-time cast member of the Guinness Book of World Records’ longest-running play, “Gold in the Hills,” where she played Mrs. Vanderlop.

“She was really a delightful person and was somebody who took her responsibility very seriously in being part of a show,” Dr. Paul Ballard said.

Ballard has served as the Vicksburg Theatre Guild president, directed numerous productions and performed alongside Kolb.

Mike Calnan, an active member of the guild, said he enjoyed knowing Kolb.

“She was kind, personable and a good actress. And she was just an all-around wonderful human being,” he said.

Lee Waring, who was a Miss Mississippi Pageant hostess with Kolb, described her as a “lady with many talents.”

“As a Miss Mississippi Pageant hostess, she always made the contestants feel special,” Waring said. “She always promoted Vicksburg, and Bertha never met a person in need that she didn’t try to help in some way. I felt honored to be her friend.”

Kolb was a member of St. Alban’s Episcopal Church and was also involved with the Mississippi Garden Club and the Vicksburg Garden Club.