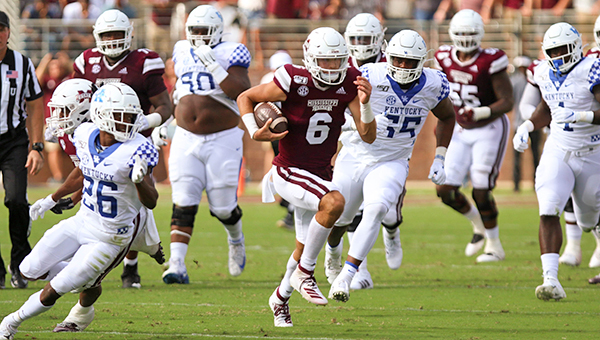 Mississippi State has added games against Vanderbilt and Georgia, while Ole Miss gets Kentucky and South Carolina in the revised league schedule released Friday.

The SEC added two additional cross-divisional opponents in a scheduled shortened to 10 conference-only games with play beginning on Sept. 26. That’s three weeks later than the original opening weekend and two after several schools were scheduled to start SEC play.

The SEC will play 10 games over 11 weeks under the new schedule and conclude with the championship game on Dec. 19 in Atlanta after an open week. The divisional format will remain.

“We made every effort to create a schedule that is as competitive as possible and builds on the existing eight conference games that had already been scheduled for 2020,” SEC Commissioner Greg Sankey said in a release. “This schedule is a one-year anomaly that we have developed under unique circumstances presented by the impact of COVID-19.”

The dates of each game are still to be determined. In addition to the six SEC West opponents, Mississippi State will East Division opponents Vanderbilt and Missouri at home, and Georgia and Kentucky on the road.

Other home opponents for the Bulldogs are Arkansas, Auburn and Texas A&M. They’ll play Alabama, LSU and Ole Miss on the road.

The Rebels’ road games will be at Vanderbilt, Arkansas, LSU, Texas A&M and now Kentucky.

“It’s exciting to see our league take another step toward finalizing the schedule, and I’m grateful that our players and fans will have the opportunity to experience these additional matchups with South Carolina and Kentucky along with our other eight opponents,” Ole Miss head coach Lane Kiffin said. “As planning continues toward a 2020 season, we will continue to keep the safety and well-being of all those involved at the forefront of our discussions.”

Defending SEC and national champion LSU will host Missouri and visit Vanderbilt in its expanded league schedule, while Alabama will visit Missouri and host Kentucky.

For LSU, which must navigate a tough West Division including Alabama each season, the road initially appears to be smoother with teams that finished at the bottom of the SEC East last year.

Meanwhile, Alabama gained a split of sorts against the Missouri Tigers but will face a Kentucky squad seeking its fifth consecutive bowl game and third win in a row.

Defending East champion Georgia already has Alabama (road) and Auburn to deal in addition to its regular divisional battle with Florida. The Bulldogs gained a road game at Arkansas and will welcome Mississippi State and colorful first-year coach Mike Leach to Athens.

Florida’s new lineup features a bit of both worlds. The Gators host an Arkansas squad that went 0-8 in SEC play last fall, but travel to College Station, Texas, to meet an Aggies team coming off an 8-5 finish.

Finalizing the expanded schedule wrapped up a busy Friday of coronavirus-related adjustments for the SEC.

Coaches, staff and other personnel will be required to wear face coverings on the sidelines at sporting events this fall. The initial guidelines include testing requirements, procedures for infections and contact tracing, and protocols for quarantine and isolation.

“Our student-athletes, coaches and staffs are dealing with unique challenges,” Kentucky athletic director Mitch Barnhart said. “We appreciate Commissioner Sankey, the SEC Office and the SEC Medical Task Force for their dedication and leadership as we take the next steps in this process.”