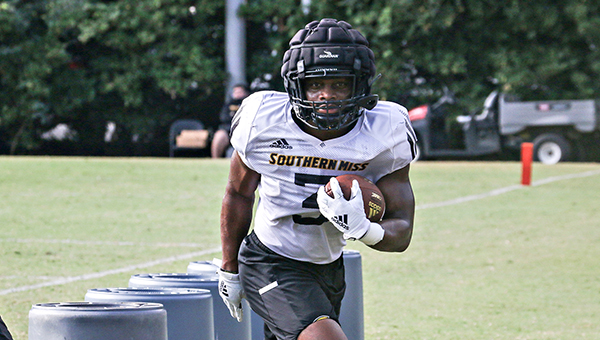 HATTIESBURG — As conferences around the country — including its own — decided and discussed the fate of the 2020 college football season, Southern Miss’ team plowed ahead with its preseason camp.

The Golden Eagles returned to practice Wednesday morning after several days off, as they continued to prepare for the season opener against South Alabama on Sept. 3. The workout came less than 24 hours after the Big Ten and Pac-12 conferences postponed their seasons, and on the same day Conference USA officials were scheduled to meet to discuss issues related to the COVID-19 pandemic.

More than 50 of the 130 teams in the Football Bowl Subdivision, as well as some in the lower-tier Football Championship Subdivision, have canceled or postponed their seasons. Some have announced plans to play in the spring, but the shift this week toward cancellation has cast serious doubt on whether any football will be played this fall.

Earlier this week, C-USA member Old Dominion announced it will cancel its season. Another league member, UTEP, suspended preseason camp after four players tested positive for COVID-19 on Sunday. League officials were scheduled to have a meeting Wednesday night to discuss the issue.

Southern Miss was not scheduled to play Old Dominion this season, but does have a road trip to UTEP scheduled for Oct. 17.

Rice has also announced it will delay the start of its season until Sept. 26, although that was done by not rescheduling three non-conference games that had already been canceled. Conference USA is allowing its teams to play a full 12-game schedule — as Southern Miss plans to do — but is focusing on an eight-game conference season.

Southern Miss head coach Jay Hopson, a Vicksburg native, said he’s tried to keep his team focused on the current situation instead of any number of other possible scenarios.

“Just like I told our players today, we have a 12-game schedule,” Hopson said. “As of Aug. 12, we have 12 games and we are kicking off Sept. 3. We are preparing that way. We have no other choice because that is our schedule.”

With that in mind, Hopson and the Golden Eagles continued the usual routine of sorting out position battles on both sides of the football.

One that Hopson highlighted when speaking to the media via a Zoom interview following practice was running back, which seems to have a lot of depth. Incoming freshman Frank Gore, Jr. — the son of the longtime NFL star — will join returning players Darius Maberry, Steven Anderson, Trivenskey Mosley, Kevin Perkins and Hinds Community College transfer Don Ragsdale in a multiple-way battle for playing time.

“I have said that you have to have three at running back to be successful,” Hopson said. If you don’t, then you are insane. That is a position that takes too many hits and guys have to get in and out of the ballgame. I have been really pleased with our running backs. Those guys have done a great job.”

Hopson also announced the addition of quarterback Trey Lowe to the roster. Lowe is a graduate transfer from West Virginia, who will be listed as a redshirt sophomore this season. He played in six games for West Virginia last season, but only attempted two passes.

“Trey Lowe has done a good job as he is just starting to get an (understanding) of the scheme,” Hopson said. “He is an exceptional talent and we are excited to have him in the fold.”