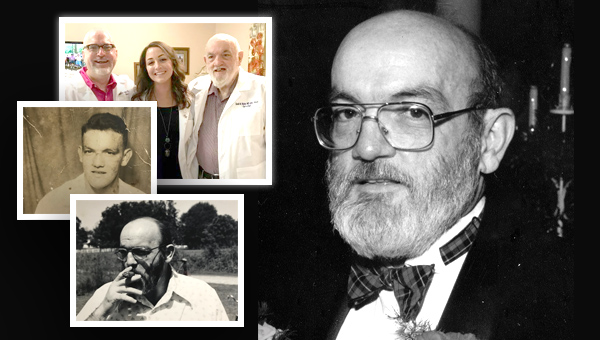 No matter their financial means, Dr. Gene Walker cared for women in Vicksburg and surrounding communities for 40 years.

At one point, his son, Dr. David Walker, said his dad was delivering about 100 babies a month.

After studying at Hinds Junior College and Millsaps, he was accepted into the University of Tennessee School of Medicine in Memphis. After that, and before returning to Vicksburg to practice medicine, Gene served his country in the Public Health Service in the late 1950s as a general medical officer at the Leavenworth Federal Penitentiary.

“The ‘Birdman from Alcatraz’ (Robert Stroud) was an inmate while my father served there,” David said.

After his service to the military, Gene returned to medical school at the University Of Tennessee School Of Medicine in Memphis for a specialty in obstetrics and gynecology.

“After finishing, he moved back to Vicksburg and started seeing patients at the Street Clinic,” David said. Gene later opened a private practice on Mission 66. He retired in 2005.

Reflecting on his dad’s work ethic, David shared a story a fellow doctor once told him.

After finding out David was Gene’s son, this doctor said he had covered for his dad one weekend and had never worked so hard in his life. Another story David shared about his dad was told to him by an employee at the G.V. Sonny Montgomery VA Medical Center, where David is the medical center director.

“I was at an employee orientation and one of the new employees stands up and said, ‘I knew your dad because 25 years ago, I was 18 and pregnant. The world was upset with me and my mom was mad at me and I found your dad and he treated me with respect and delivered my baby, and I will never forget your dad,’” David said. This employee was not alone.

“We could not go out to eat without running into people who would come up to my Dad and tell him that he had delivered their children,” David said. “Eventually, they would say that he delivered their grandchildren too.”

In addition to meeting the needs of so many at all stations of life, Gene was also an avid runner.

“He could be seen running in the Vicksburg National Military Park early in the morning or before sunset starting in the 1970s. He even ran into a cow in the park once,” David said.

Despite his healthy habits, Gene had a problem quitting cigars.

“For many years he tried to quit smoking cigars but every time he would deliver a baby somebody would give him a large box of cigars,” David said. “He finally quit sometime in the 1980s.”

Gene was also an art collector and an advocate for the state, cheering on all the Mississippi schools.

“I am proud of my dad. He took care of all women in the state and also Louisiana. He was committed to it and prided himself in that,” David said. “I think dad was like the saying, ‘Life is a journey not just a destination,’ and I think a commitment of taking care of people was important to him and part of his legacy.”