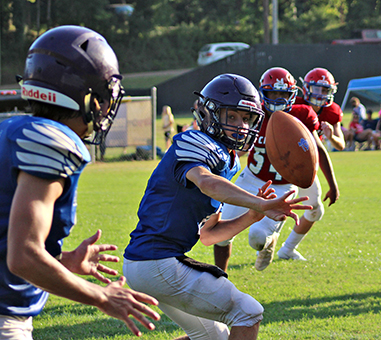 Porter’s Chapel Academy came through its preseason scrimmage encouraged by its performance, and with no major injuries.

More importantly, it came away with a clean bill of health.

PCA coach Blake Purvis said there were no sick players after last week’s three-way scrimmage with Tensas Academy and Glenbrook Academy. In the age of COVID-19, that’s the biggest victory the Eagles could have hoped for as they prepare for Friday’s regular-season opener at Benton Academy.

“So far, so good. We showed back up Monday at full strength, with nothing out of the ordinary other than the occasional bump and bruise. All is well on the home front right now, and hopefully it’ll stay that way,” Purvis said.

Last week’s scrimmage gave PCA its first glimpse of what the team will look like this season, and the rest of Mississippi’s high school football teams and idea of what kind of strange season lies ahead.

Players from all three teams had their temperatures checked upon arrival. Tensas and Glenbrook’s players were scanned before they left for the game, and again on the bus when they got to the field.

Attendance was limited to 25 percent capacity, and mask use and social distancing were encouraged. The 217 fans in attendance — comfortably below the 300 that were allowed — spread out into small groups scattered around the perimeter of the field. Many did not wear masks in the 93-degree heat.

On the field, players ran and threw, blocked and tackled like any other game. Purvis said that part of it was a blessed relief after five months of fear and uncertainty related to the pandemic.

“It felt good. It was an escape from the reality we’ve been living,” Purvis said. “It was a reward for the guys that have been working all summer and all spring and haven’t had a chance to do anything competitive-wise, to get out there and compete. I think there was a lot of good in that. There was a lot of rust to knock off. But I think we’ve got good things to build on and we can move in a positive direction.”

This week, the games start to count. PCA vs. Benton is one of four “Week Zero” games in the Mid-South Association of Independent Schools. The games were brought about because of an uneven number of teams in the 2019-21 realignment cycle, and this is the second year in a row PCA and Benton have kicked off the season.

The rest of the MAIS will begin its season on Aug. 21. The Mississippi High School Activities Association delayed its opening week until Sept. 4.

Plenty of uncertainty remains until the games actually kick off — as evidenced by this week’s decision from several major college conferences to cancel their seasons — but Purvis said making it safely through the scrimmage and each week thereafter could show it’s possible to balance both football and virus safety.

“As we’ve seen since March with this, all can be well one day and completely upside down the next. You’ve still got to keep your emotions in check as far as that’s concerned,” Purvis said. “It does give a little bit of momentum for sports that we can do this. Nick Saban said they act like the only way they can get the virus is by playing football. That’s not the case. You can get it anywhere.”

Another bit of uncertainty that is on Purvis’ mind stems from this week’s opponent. Benton Academy beat the Eagles 28-0 in the 2019 opener and went on to finish 3-7. With no film from a spring game or chance to scout, however, Purvis said both teams are flying blind heading into the 2020 opener.

“We’ve tried to put in offensive and defensive game plans and we have no idea what we’re facing,” Purvis said. “We played them the first game last year, so all we have is their film from 10 or 11 games ago, a year ago. Most teams are going to change stuff throughout the year, so what they were doing at the end of the year we probably didn’t see at the beginning of the year, and there’s a good chance they’re doing it at the beginning of this year.”

The same dynamic works both ways, though. PCA finished with a 2-8 record in 2019, but replaced nearly a dozen graduated seniors with eight transfer students and some underclassmen that are stepping into bigger roles.

Freshman running back Brayson Morson had 253 rushing yards and four touchdowns in the scrimmage and eighth-grade defensive back Jace Jung intercepted two passes. A lot of that was done against junior varsity competition, but both players will see time during varsity games this season.

“Personnel-wise, we’ve obviously changed a lot. We lost 10 or 11 seniors and we’ve gotten some transfers in. I feel like our scheme is similar. We do what we do, and hopefully execute it well enough that we can be successful,” Purvis said.

The Eagles have also been sporting a different look during the preseason, in a different way.

They ordered new helmets from manufacturer Riddell, but because of supply chain disruptions did not receive them in time for last week’s scrimmage. Purvis said their sales representative scrounged up some temporary replacements from other teams for them to use, resulting in a mismatched look.

Most of PCA’s substitute helmets were purple instead of their usual blue or black. One, worn by freshman linebacker Gage Palmer, was white and had another team’s logo on it.

Purvis said PCA’s new helmets shipped this week and he hopes to have them in time for Friday’s game.

PORTER’S CHAPEL AT BENTON ACADEMY
• Friday, 7 p.m.
• Radio: 104.5 FM
• Notes: Benton Academy beat PCA 28-0 in the 2019 season opener … this is one of four MAIS “Week Zero” games, and one of the first high school football games in the country this season … Benton leads the all-time series between the teams 9-7