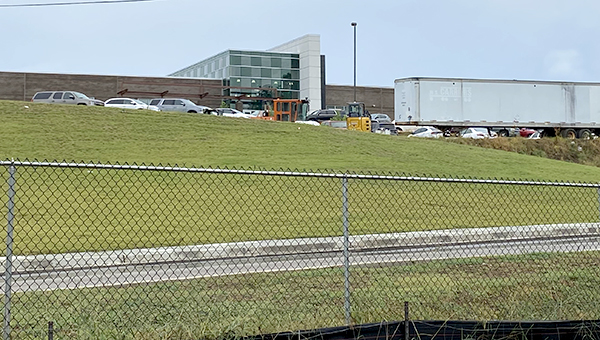 The ongoing massive expansion and renovation work at Vicksburg High School continues. The high school — along with all of the other schools within the Vicksburg Warren School District, will welcome back students Monday for the first day of school. (Tim Reeves/The Vicksburg Post)

Work will still be ongoing at the Vicksburg Warren School District’s school buildings, but schools are ready for students to return Monday, a representative for Dale Bailey Architects said.

“All the major issues have been taken care of,” said Gary Bailey, project manager with Dale Bailey Architects of Ridgeland. The company has the contract for designing and overseeing the Vicksburg Warren School District’s $131.5 million facilities renovation and upgrade project involving the district’s school buildings.

“It will obviously still be a construction zone in several areas because contractors are working around the schools, just like before we dismissed for COVID, but they’re used to it,” Bailey said. “So we’re ready to go.”

“There’s still major work going on at both the high schools and the junior highs but it’s not impacting the school,” he said. “We’ve got a plan and we’re ready for kids.”

Vicksburg Warren School District spokeswoman Christi Kilroy said the individual school principals have developed parking and child drop off and pickup solutions for their schools, adding parking has been reduced at Vicksburg High School and an additional parking lot has been added at Warren Central.

Bailey said the base layer of asphalt has been laid on Rosa A. Temple Drive.

“What we decided to do drive on that for a while before putting the top layer down,” he said.

Rosa A. Temple Drive, which runs by the Academy of Innovation and the junior high schools, has been widened to have two lanes going in and two going out with a boulevard between the lanes.

“There are turn lanes at AOI to keep it separate, so it’s going to be dramatically improved circulation to all three of those schools,” Bailey said in an Aug. 4 interview.

“As the traffic reduces it reduces the lanes,” he said, adding there will be an access lane to allow southbound traffic on Mission 66 to access Rosa A. Temple.

Warren County voters in March 2018 approved an $83 million bond referendum to help finance the $131.5 million facilities plan for repairs, renovation and expansions at each of the district’s 13 schools and the construction of one new building.

Work on the project received a boost in mid-March when the Vicksburg Warren School District Board of Trustees closed the school system and went to a distance learning program out of concern for the COVID-19 virus. The change in the school schedule allowed some projects to get ahead of schedule.

The work at Bovina Elementary and Redwood Elementary, Bailey said, probably benefitted most from the school closure.